Baseball off-season means two things to American sports, at least in places colder than Florida and Hawaii. 1) Team owners assemble for their "winter meetings," hemming and hawing over free agents. Media folks hype up for it, as our only source of team news until the kickoff of spring training. 2) We watch or practice other sports, like basketball. I am dead certain Bunny Levitt--record holder for consecutive free throws--spent many winters practicing, at least from fifteen feet away. 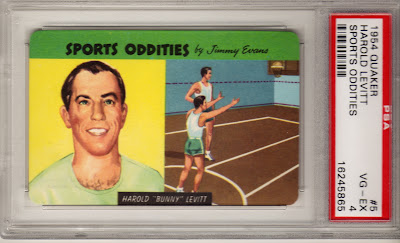 Card front
Levitt set this record for consecutive free throws (499) at a promotional event in 1935, ultimately missing the 500th. (We assume more people attended than his one friend pictured on the card, though after 300 consecutive shots, I can understand people drifting away to other things.)

Harold went on to tour with the Globetrotters, lived a long life, and passed away in 2006. His New York Times obituary mentions this very card! 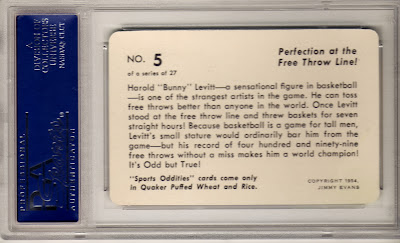 Card back
Quaker still makes their Puffed Wheat and Puffed Rice cereals, previously profiled in my 1934 Baseball Trivia #5 profile. This "Oddities" set rolls together a bunch of different sports--football, golf, and basketball among them--including one baseball card noting no hitter ever knocked a ball completely out of Yankee Stadium. (I've seen sets still wrapped in cellophane, so assume you could mail order one directly from Quaker Foods.) Find the 27-card checklist at Baseball-Cards.com.

Value: Found this card for $5 on eBay, PSA holder and all. Several of Quaker's football players (Amos Alonzo Stagg, George Halas, Bronko Nagurski) made the football Hall of Fame, so will cost more.

Interesting post. Bunny was my uncle although I did not see him much. Unfortunately the free throw shooting gene did not pass to me as my lifetime consecutive mark did not exceed fifteen.