Sports Cards for Collectors (SCFC), progenitor of the previously-profiled TCMA, produced this 82-card set of retired greats for (and marketed them to) regular buyers of memorabilia, rather than casual baseball fans. They shopped directly to collectors for two reasons: first, few kids would know pre-WWII retirees like Honus Wagner and second, SCFC already knew those "serious" buyers through their newsletter. This audience awareness made a big difference in their success, compared to Fleer's relative failure with Baseball Greats sets in 1960 and 1961. 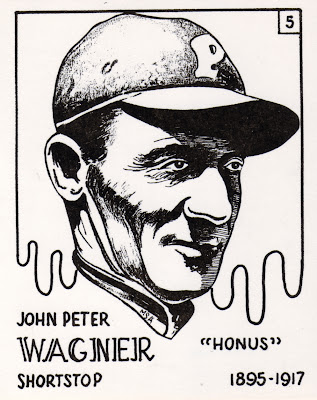 Card front
SCFC co-founder Mike Aronstein contracted with his uncle Myron for this hand-drawn set, though (according to this interview) aunt Margie also contributed art at some point, so the MSA signature on Wagner's collar could be either one.


Quick recap of TCMA's hand-drawn sets, with links to the numbered #5 set profiles. 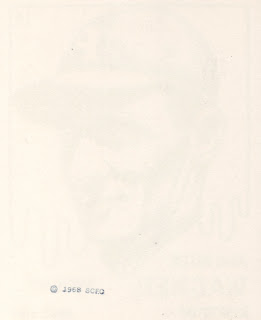 Card back (with date stamp)
Look closely to see a reversed image of Wagner on the back. SCFC used glossy fronts and plain paper backs, so this "ghost" is ink transferred from a stack of printed sheets. Cards from the set's second half included stats and a player bio on the back, with this checklist breakdown.

Value: This Wagner cost $5 eBay in 2008, a nice find given the small number printed. As with most sets, Ruth and Cobb likely cost more.

Fakes / reprints: According to Mike Aronstein, no one reprinted their sets, so I don't expect to find any in the marketplace.
Posted by Matthew Glidden