2010 Hall of Fame voters elected former GM Pat Gillick on December 6, joining three of the men pictured on today's card: Mickey Mantle, Brooks Robinson, and Harmon Killebrew. Only slugger Dick Stuart misses out, given his offensive drop-off after peaking from 1961 to 1964. 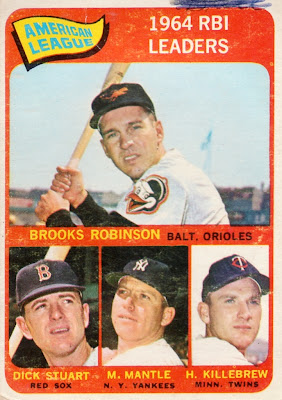 Glove worries aside, Dick did make the All-Star game in 1961 with a SABRmatrician-friendly season. Despite leading the AL in only one category (strikeouts!), he hit for 139 OPS+ and 3.2 offensive WAR, both significantly better than what 1964's apparently similar "core" stats (hits, homers, and RBIs) produced. 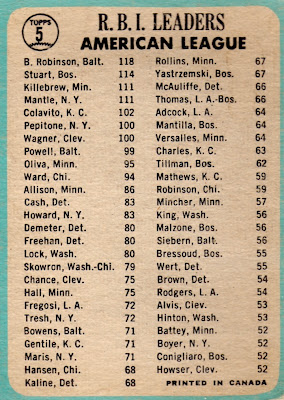 Card back
1965 marked Canadian candy maker O-Pee-Chee's first Topps-licensed baseball set and matches the American design word-for-word, other than "PRINTED IN CANADA" on its back. (Compare this to my 1965 Topps #5 profile for confirmation.) OPC stopped at #283, less than half of Topps 598-card checklist. It's rare and includes plenty of stars, making a full set tough to assemble.

Fakes / reprints: Haven't seen O-Pee-Chee "reprints" in the market, but it's possible someone faked it for the Mantle.
Posted by Matthew Glidden