If I were to describe any batting stance as "conservative" or even "modest," this half-crouch by Gold Glove shortstop Edwin Albert Brinkman might be the one. His focused anticipation and classic 70s glasses even give the impression one can outsmart incoming fastballs, rather than hit them. 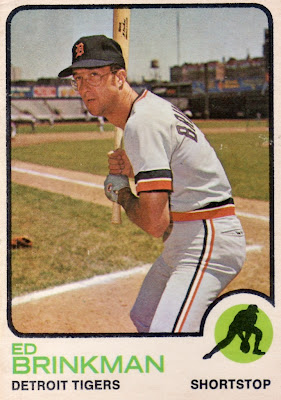 Card front
O-Pee-Chee finally matched Topps card-for-card in 1973, with the same number of players (660) and no checklist changes or on-card variations. Whiter card stock and a PRINTED IN CANADA tag line mark the only obvious differences--(UPDATE: plus French text translations on the back)--though it does seem OPC's print runs dropped off during the mid-70s, making those years harder to come by than singles from 1970 to 1972 and 1978 on. (Building complete sets from those years is not an easy undertaking.) 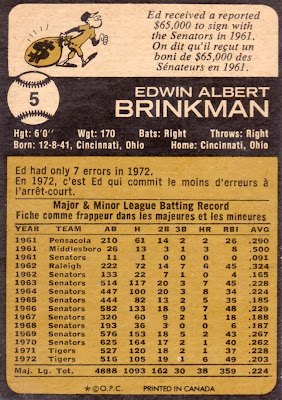 Value: Low-grade singles cost a dollar or two and OPC's rarity only seems to impact top-condition stars. (For example, CheckOutMyCards lists a mid-grade Bob Boone RC for $12, the same price as Topps versions.)

Fakes / reprints: Don't know of any OPC reprint issues and doubt someone would fake the set, given its low profile.
Posted by Matthew Glidden

"whiter card stock and a PRINTED IN CANADA line mark the only obvious differences"...

I think the addition of French text also makes the cards stand out from their Topps counterparts. But that's just my own opinion.