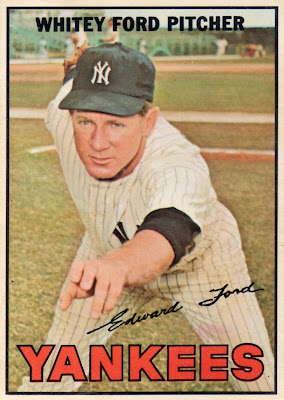 Card front
You might find this pose unflattering for a future Hall of Famer, but Topps used a lot of follow-through pictures on their Whitey Ford cards. (Page through them at CheckOutMyCards.com.) In my opinion, they pale in comparison to his exuberant and artful 1951 Bowman rookie. 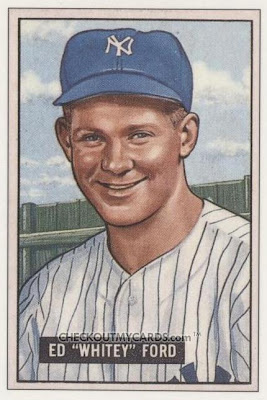 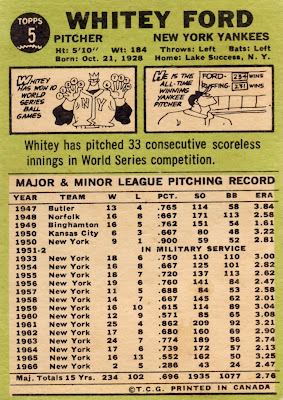 Card back
OPC's 1967 set reprinted Topps' first 196 cards, same as the previous year's total. Fronts and backs match up almost exactly, save for the tiny PRINTED IN CANADA tag line.

More than 40 years after his retirement in 1967, Ford remains baseball's all-time leader in World Series starts (22), wins (10), and strikeouts (94). Whitey broke the scoreless innings record in 1961--surpassing Babe Ruth's mark set with Boston in 1916 and 1918--and only stopped there because of an injured ankle in game four. (His two scoreless victories also garnered series MVP honors.)

Value: Low-grade Ford cards cost several dollars and move up quickly from there. He starred for a lot of pennant and World Series winners, so remains a high-demand player.

Fakes / reprints: Topps used Whitey on a number of reprint and throwback cards, but I don't know of any OPC reissues.
Posted by Matthew Glidden

I love the 67 Whitey card. I have a couple of Topps reprints but still no original.

Nice--I've always wondered about that card's background. Those must be spring training stands, right? Or is something else going on with that greenery?