Do Milk Duds make you think of movie theaters? School recess? How about baseball games?  Candy makers M. J. Holloway took advantage of the MLBPA's taste for player licensing income with this 72-box set; each one pictures an active player from 1971 and originally contained a dozen or so of their chocolate-dipped caramels.

Card front
The lower-right corner text, "Don't Forget! SLO-POKE," promotes another caramel created by Holloway in 1926. Most candy stores still offer Milk Duds, but Slo-Poke switched makers after 1971 and isn't seen much anymore. Find them these days at OldTimeCandy.com and similar retro sites. 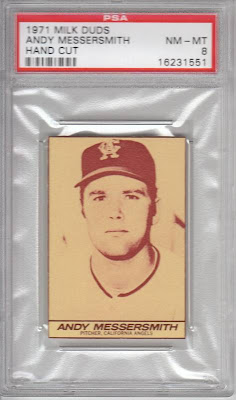 Hand-cut version, no box
Holloway printed three players for each number from 1 to 24; Andy Messersmith (Angels), Billy Grabarkewitz (Dodgers), and Thurman Munson (Yankees) share #5. Most Milk Duds baseball "cards" survive as just a trimmed portrait--the only baseball element of its package--but trimming away the box panels removes its number and cuts resale value by at least half.)
Messersmith made four All-Star teams, but served the players union more significantly as a key part of the end of baseball's Reserve Clause and free agency's ensuing growth. Check out the history at Andy's Wikipedia page.

Card back
In my mind, Milk Duds remain locked in an eternal war with Whoppers, and I prefer the former's caramel over its competitor's malted chocolate. (This side of the box cross-marketed "BLACK COW," a sugar sucker since retired by Holloway--just another casualty in their war for candy supremacy.)

Value: Most trimmed singles cost a dollar or two and up to $20 for stars like Clemente and Rose. Full boxes start about $10 and that's what I paid for Messersmith on eBay in 2006.

Fakes / reprints: Don't know of any reprints, but there's an entertaining discussion of "refilling" boxes (and any change in value) at Net54Baseball.com.
Posted by Matthew Glidden