R.I.P. and thanks to Leslie Nielsen for decades of acting excellence. It's nigh-impossible to pick one "best" film from his resume, but I love Airplane! for bringing out straight-faced comedy from former dramatic actors Nielsen and Peter Graves (who played the pilot). The latter worried his creepy one-liners would turn off audiences, but they hit just right for people tired of cliched disaster movie characters. ("Joey, do you like movies about...gladiators?") 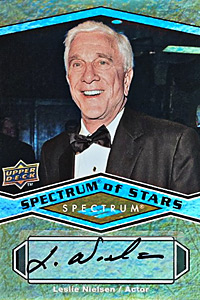 2009 Upper Deck Spectrum of Stars
Thanks to Seattle Times writer Larry Stone for reminding me The Naked Gun also made Jay Johnstone a Mariner for one day, batting leadoff against the California Angels. (Jay donned uniform #29 for it, digits he never wore as a major leaguer.) 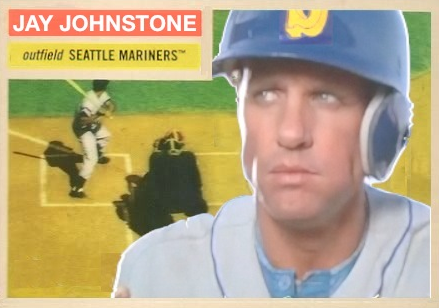 My 1956 tribute card of Johnstone and Drebin
Watch the scene again (at YouTube) and relish how long Nielsen and Zucker milk the first strike call. Superb.
Posted by Matthew Glidden