Canadian candy company O-Pee-Chee (OPC) licensed Topps baseball set designs and player checklists starting in 1965, a tradition that continued into the 1990s. It's hard to know how many MLB fans lived north of the border in the mid-1960s, but Montreal would get their expansion team in 1969, so it must've been enough to make a card set worthwhile. 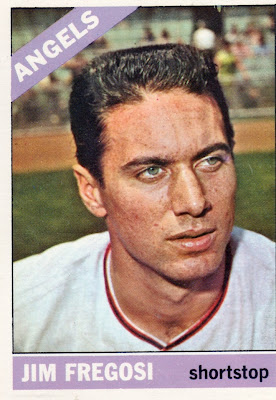 Like their 1965 debut, O-Pee-Chee's 1966 set reprinted just the first two Topps card series and stopped its checklist at 196 cards. While that means Canadian collectors missed out on 2/3 of American players, even this limited version contained stars like Mays (#1), Mantle (#50), and Jim Palmer's rookie (#126).

Why no hat for Mr. Fregosi? My "Men Without Hats" article explained the complete lack of Angels headgear in 1966 Topps and OPC versions got the same treatment. I assume editors did it to save the cost of sending a photographer to every spring training, every year. Unfortunately for them, the Angels changed team logos prior to 1965, sticking Topps with obviously outdated (and perhaps legally unusable) headgear pictures. 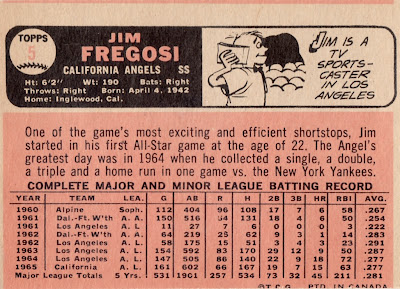 OPC cards used slightly grayer stock, and their singles mix easily with US versions, so it's worth checking backs for PTD. IN CANADA (lower right corner) if you built a 1966 Topps set by hand.

Looking at any card back will make you think about baseball stats, especially a guy who lost significant time to injuries like Fregosi. While perusing his Baseball-Reference page, something about Jim's career numbers stood out to me. In 18 years as a multi-position defender, he played a single game at 2B, and only 1/3 of an inning at that! While versatile in his younger years, that's not where you expect to position a pinch-hitter with bad knees close to retirement. So what happened exactly? 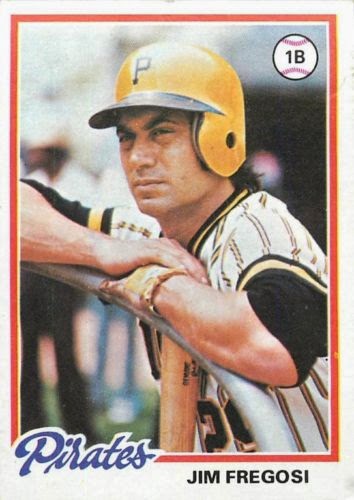 This outlier game happened wearing a Pittsburgh uniform in 1978, his last year as a player, where the Pirates used Jim primarily to pinch-hit for pitchers (and probably as an unofficial bench coach). Of 26 total appearances, only 5 games saw him take the field with a glove.

Facing San Francisco on May 9th, Pittsburgh made five playing substitutions in the top of their 9th, swapping out four hitters and one runner. They came back to tie the game (good), but those moves emptied their bench for the bottom half (bad). Forced to field multiple players out-of-position, manager Chuck Tanner put Fregosi in at second and moved normal LF Bill Robinson to third.

What happened when San Francisco came to bat? With one out, Jack Clark bunted to third, knowing Bill Robinson couldn't field the position well. Clark then stole second and took an extra base when catcher Ed Ott's throw went into center (past Fregosi?). Larry Herndon slapped a single up the middle and Clark trotted home with San Francisco's winning run, thanks in large part to Pittsburgh's out-of-position fielders. Tanner credited Clark's "heads-up baseball" as key to the Giants win. (Full story from May 10, 1978 Beaver County Times.)

Given diminished skills with both bat and glove, Fregosi jumped at the chance to manage his original team, the California Angels, when they asked about Jim's availability. Pittsburgh gave their creaky 36 year-old two final appearances (May 30th and 31st, as above) and then released him to the Angels, who replaced Dave Garcia with Fregosi two months later. Jim went on manage 15 years total with 4 teams, capturing one NL pennant with Philly in 1993.

Fakes / reprints: Don't think OPC reprinted anything, apart from their own adoption of Topps' designs.
Posted by Matthew Glidden

TONS of baseball fans in Canada then, including myself. As a kid I had lots of 1967-72 cards, love the 1970 series. I was a Tiger fan until the Expos, then both Expos and Blue Jays.

Thanks Ro, sounds like Topps (and MLB) made the right move by publishing their sets in Canada. Did you collect other sports, too? Hockey, CFL?

Nice story about Fregosi's game at second base. I had never associated Jack Clark with "heads-up baseball."

Clark was an unlikely "hero" for that story, no doubt about it.