Even in the modern game, a 20-homer catcher with sturdy, 100+ game knees can craft a lengthy career. Back in the 1960s, few guys could pull it off at all, let alone rock the black sleeve-and-cap look John Romano wears on today's #5. 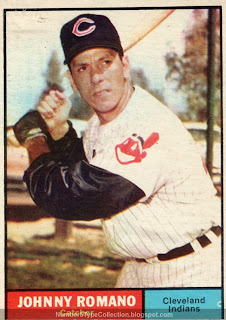 Card front
"Honey" Romano caught at least 100 games six times and made 2 All-Star games, thanks to solid hitting and a decent eye. His 1959 White Sox team won the AL, but lost the Series to L.A.'s newly replanted Dodgers. Romano got but a single at-bat, as veteran Sherm Lollar held state behind the Chicago plate and started all 6 games. 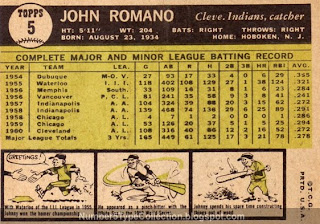 Card back
Following that pennant-winning season, Cleveland extracted both Romano and Norm Cash from Chicago in a 7-player trade. After 5 good years as an Indian, the White Sox brought Romano back in another 7-player deal, this time involving both KC and CLE. (The latter included a young Tommy John and slugger Rocky Colavito.) Johnny eventually closed out his career backing up Tim McCarver in St. Louis.

Value: 1960s Topps "commons" cost 25 cents to $1, depending on condition. This one's miscut top-to-bottom, a frequent enough problem for almost any set printed prior to 1980.

Fake / Reprints: All-Star games aside, I doubt anyone could get rich reprinting Johnny Romanos!
Posted by Matthew Glidden