"The Quaker guy" serves as one of America's most recognizable icons and he's practically the face of healthful food, given what we think of oatmeal and bran. With almost 150 years under his hat, I expect this Mona Lisa-like logo will be with us into the foreseeable future.


In 1934, the same year Quaker produced these trivia cards, slugger Jimmie Foxx appeared on a competing box of Wheaties, swinging his powerful stick. Unfortunately for Quaker, they aren't the brand that stuck to baseball in the public consciousness. No one complains they "shoulda eaten my Puffed Wheat" on the baseball diamond--folks say "someone ate their Wheaties today!" That successful advertising.


Card corners came pre-cut at an angle--like playing cards--so my worn #5 looks extra rounded. I couldn't find out much about the set, apart from the name, so will add a checklist or other info when available.


Quaker also made a Babe Ruth pin in 1934, which fans probably obtained by mail. The company clearly wanted to promote itself using baseball tie-ins, but an extensive use of player endorsements proved much more successful for Wheaties. 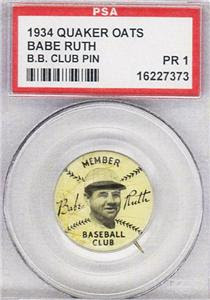 UPDATE: Quaker organized at least one mail-in offer in 1934, including a fan-written limerick contest. Thanks to eBay for this photo of the reply envelope, a picture of Babe, and note that non-winners received. 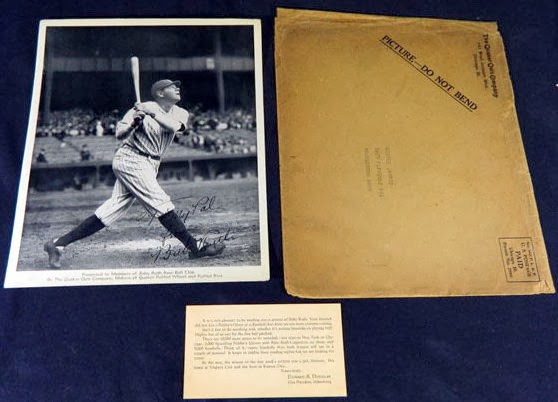 The note from Quaker VP of Advertising, in detail. 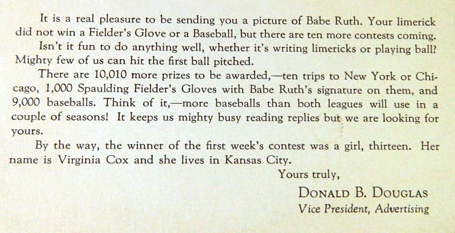 Congrats, 13 year-old Virginia Cox of Kansas City! That's pretty cool. (If still with us, she'd be about 93 today!)

Value: I bought the #5 trivia card for $9 and have seen a couple of graded examples on eBay, but not enough to estimate typical values.