This post could be about HOF outfielder Charles "Chick" Hafey, who won 2 titles with the Cardinals (more at Wikipedia), or publisher Schutter-Johnson, a 20th century candy company best known for Bit-O-Honey (more at Candyblog). With good coverage elsewhere, I'm most interested in the artist (and former MLB pitcher), Al Demaree. 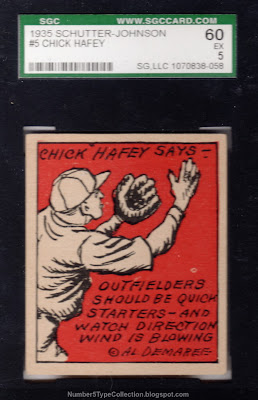 Card front
Mr. Demaree pitched a total of 8 seasons for 4 teams from 1912 to 1919, finishing with 80 wins and an exactly league-average 100 ERA+. He made 20+ starts 5 straight years and pitched one (losing) World Series game for the 1913 Giants. (Career stats at Baseball-Reference.com.)

Most players move on to post-baseball careers without fanfare. Unless they stay "in the game" as a coach or manager, it's as if guys who "retire" (in their 30s!) vanish like a magician in a cloud of concealing smoke. Al broke that tradition by becoming a syndicated cartoonist, ultimately appearing in far more papers as an illustrator than a pitcher. The Sporting News used Al's work extensively and today's set includes 50 of his batting and position sketches. (Findagrave.com has a picture of the artist himself.) 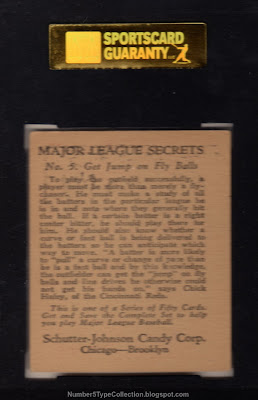 Card back
The scan came out hazy, so here's its tip on playing the outfield.

To play the outfield successfully, a player must be more than merely a fly-chaser. He must make a study of all the batters in the particular league he is in and note where they generally hit the ball. If a certain batter is a right center hitter, he should play there for him. He should also know whether a curve or fast ball is being delivered to the batters so he can anticipate which way to move. "A batter is more likely to 'pull' a curve or change of pace than he is a fast ball and by this knowledge, the outfielder can get the 'jump' on fly balls and line drives he otherwise could not get his hands on," says Chick Hafey, of the Cincinnati Reds.

This is one of a Series of Fifty Cards. Get and Save the Complete Set to help play Major League Baseball.

One day, I hope to cover another of Al's sets, the extremely rare 1934 Demaree Die-Cuts (more info at CenturyOldCards.com). Unfortunately, I've never even seen a #5 from that set, let alone had the chance to buy it. If you've seen one, or possess a scan, let me know!

UPDATE: Interesting coincidence! Morgan Ensberg blogged about defensive positioning today and its critical difference in a game against St. Louis.

Value: Schutter-Johnson cards cost $100 and up, due to rarity. I think the sketch style holds down demand somewhat, but there's no question you'll pay a lot, even for commons. (This SGC graded card cost about $175.)

Fake / Reprints: I haven't seen an "official" reprint set, but suspect people have faked the famous players, due to rarity and value. As always, stick with dealers (or grading companies) you trust when purchasing high-value cards!
Posted by Matthew Glidden