One of baseball's finest backstops of any era, this Cubs HOFer was also part of some very significant points in its history.

Cooperstown's Hall of Fame also made Hartnett's catching gear their first acquisition, an honor for any sportsman. Chicago Daily News archives include a 1926 photo of Gabby and his gear. 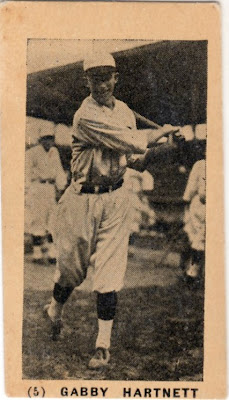 York Caramel is one of several candy and ice cream companies that sponsored look-a-like baseball sets in the late 1920s (see F50 / W502 #5 for more). 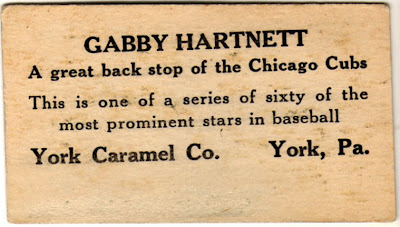 There are 3 distinct E210 printings: Type 1, Type 2, and blank-backed. Orientation of the card backs distinguish Type 1 from Type 2. Put the front photo face-up and turn it over. Type 1 text faces "left" and Type 2 faces "right." There's no other difference that I know of, either in card text or number of cards. (Blank backs obviously distinguish themselves.)

Value: E210 in good shape cost quite a bit. This miscut (but otherwise EX) Hartnett recently fetched $175 on eBay. "Commons" are closer to $50.

Fake / Reprints: While we don't consider look-alike sets from other food companies "reprints," many of their authentic examples look like copies of an E210. In addition, people have tried to fake the most valuable players, making it tough on the typical collector. If you shop for E210s, be very particular who you buy from or get graded versions from a well-known company.
Posted by Matthew Glidden