This is a card with real art, something that stands apart from "dude wearing hat" or "guy holding bat." Bob Laughlin puts Mr. Day at the ready, a whip ready to crack. Shadows obscure much of his face and right arm, but highlight the gripped ball. (Looks like a curve, and apparently Leon threw a good one.) 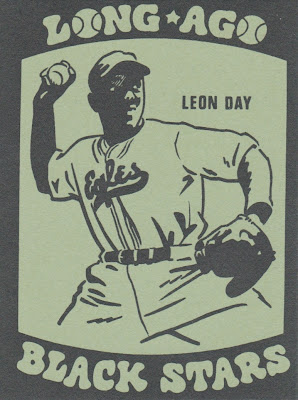 "People don't know what a great pitcher Leon Day was. He was as good or better than Bob Gibson. He was a better fielder, a better hitter, could run like a deer. When he pitched against Satchel, Satchel didn't have an edge. You thought Don Newcombe could pitch. You should have seen Day! One of the best complete athletes I've ever seen." Leon remained active into the 1950s, well after Jackie Robinson took the field in Brooklyn, but couldn't catch "it" (meaning baseball integration). In other words, young bucks grabbed major league attention, but catch-all players like Day didn't get offers to fill what were probably very few MLB roster spots.

Value: Bob Laughlin printed a wide variety of oddball issues and sold them directly to collectors. Many current dealers only carry full sets, but I found this NM single for $10. That's about the most you'd pay for one card; Leon Day ranks as a "star" from this set, since he reached the HOF in 1995.

Fake / Reprints: Haven't seen any Laughlin reprints in the market and assume the demand's too low to be worthwhile.
Posted by Matthew Glidden