Willard's Chocolates of Canada printed this 56-card, multi-sport set at the midpoint of Ruth's career. It includes 3 baseball players (Eddie Collins, Ruth, and Ty Cobb); swimmers, rowers, rugby players, and sea vessels are just a few of the other subjects. 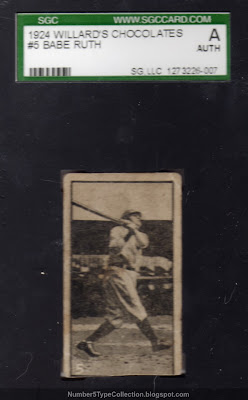 I expect Babe Ruth appears on more reprinted cards than any other player. His popularity spurred so many unusual issues that it's hard to keep track of them all, let alone know how to distinguish "reals" from fakes.

To pick just one example, 1928 Fro-Joy reprints easily outnumber authentic versions available in the market. It's quick work in large shows to find cards in various colors or with blurry printing; all of them are fake. Some grading companies no longer grade Fro-Joys, to avoid the possibility of "authenticating" a reprint. (More details at my Fro-Joy post.)

Untrimmed version, courtesy of Luckeycards.com
The card's subtitle made me look it up--was Babe really the "Home Run Champion" at that point in his career? The answer is yes, and emphatically so. Counting 1924, he'd already led the league in homers 6 times. By the time he retired at age 40, Babe made it an even dozen.

For comparison, Hank Aaron led his league in homers 4 times. Barry Bonds did it just twice. Given how awesome they both were, imagine the fan impact of all this slugging following an era when entire teams would hit less than 10 round-trippers all year.

Value: This SGC "Authentic" Ruth cost $320, approximately 10% of the Near Mint price from SCD's 2010 price guide. This Heritage Auctions listing shows a bunch of other cards from the set. (You can find low-grade "commons" for well under $100.)

Fakes / Reprints: Willard's Chocolates don't carry a "99% fake" stigma like Fro-Joys, but it's rare and valuable enough that reprints definitely exist. (Graded versions will cost more for the "assurance" of their bona fides.)
Posted by Matthew Glidden