Steve Carlton, arguably baseball's greatest lefty, won 241 games over 15 seasons for the Phillies. I thought he'd easily outdistance anyone else in franchise history, but it barely edges 1950s ace Robin Roberts by 7 wins. They also own nearly identical career ERA+ marks, at 115 for Carlton and 113 for Roberts. Of course, Lefty struck out almost 2000 more batters and won 4 Cy Young awards in Philly, so edge to him. 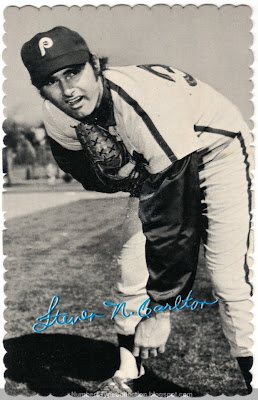 Card front
This card's crazy edging reminds me how many unusual issues Topps churned out in the 1960s and 70s. Stickers, stamps, stand-ups, "supers," rub-ons, posters, deckles, tattoos, and plastic busts all got their turn in a wax wrapper. At almost 3" x 5", 1974 Deckles hold the title of "biggest Topps card in the disco era." 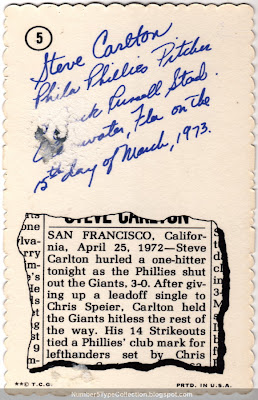 Card back
This 72-card, black-and-white set closely resembles collector postcards popular in Hollywood's golden era. Tying together the blue autograph, handwritten bio, and "torn" newspaper makes it look like a scrapbook page, which plenty of kids still put together. (This excellent Exhibit gallery includes lots of vintage cards in that style.)
While considered a regional test issue, deckles come in 3 print variations.


My #5 scan is the white back.
Value: This Carlton cost me $59 on eBay. It's low-grade due to the missing paper on the back, but shows up so rarely I was willing to overpay the book value. Common players in this condition cost $5 to $15.
Fakes / Reprints: Haven't seen anyone reprint a deckle edge card. It would take special cutting tools and a lot of collector demand to make it worthwhile. Fortunately, I doubt that much interest exists.
Posted by Matthew Glidden

Agreed--very exciting to finally get my mitts on one this year.

Forget to mention that its back includes the photo place and date, which are obviously at spring training. Not many cards call that out!