The present-day Toros play in the independent Golden Baseball League. Their previous incarnation served as AAA affiliate for several clubs, including nearby Texas and Houston. 1979 marked Tucson's final year playing for the Rangers, who the pictured uniform obviously copies. (Compare it to this 1980 Topps Johnny Grubb card.) 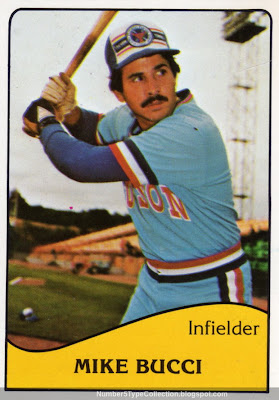 In November 2009, Paul Lukas of Uni Watch let readers vote on the title of "WORST UNIFORM EVER." I was honored (?) to submit an eventual finalist, the 1980 Tucson Toros. Their toreador-homage--yellow, orange, red, different orange, avocado, and turquoise--no doubt pushed the boundaries of what you could pay players to wear. (Worst Uni Finalists and Voting Results.) See that stunning design in my 1980 TCMA Tucson Toros set profile. 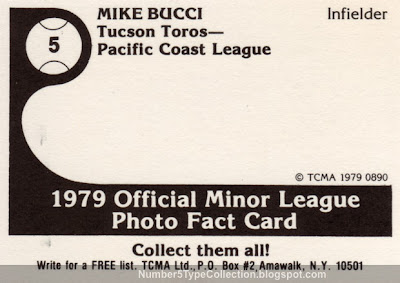 This card leaves off Mike Bucci's 1978 stats, a curious omission for an everyday player. (For the record, he sported a nice .438 OBP in 115 games, full minor league stats at Baseball-Reference.) He also played as both third baseman and outfielder, not just in the infield. TCMA produced 50+ sets in 1979, so I expect lots of cards sport at least one typo or research error.

Fakes / Reprints: People have probably reprinted valuable minor league league cards of big MLB stars, but I don't know of any for commons.

I was living in the Tucson area at this time and attended several games at Hi Corbett Field. I don't remember the uniforms, though.

Very nice--maybe they had multiple unis in 1980, with one not so crazy? The cards I've seen from that year's team set are quite something.