A friend traded this curious #5 to me in 2004, without any supporting set info. It's slightly longer than a typical baseball card and uses thin, flexible stock. Five trophy-like cups match the numbering and surround 3 batters, not unlike a tarot card's composition. (The players appear to be competing for the ball, similar to field hockey or polo.) Its title translates to "Base-ball players." 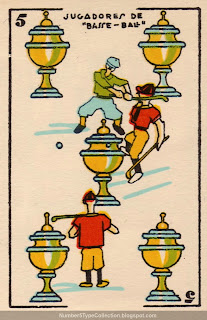 By the best info I've seen--mostly on foreign language sites--Spanish company Baraja produced this 48-card set of sports, celebrities, and other subjects in 1920. Online images show 4 "suits" (cups, swords, sticks, and balls) numbered 1-to-12 like a deck of cards. (This scan shows most of the "cups.")

I found a handful of complete sets for sale online, so assume Baraja sold them as one (boxed?) unit. The cartoon style and bright colors suggest kids or parents as the target audience and recognizable characters include Charlie Chaplin, Harold Lloyd, and other athletes and performers from the 1920s. 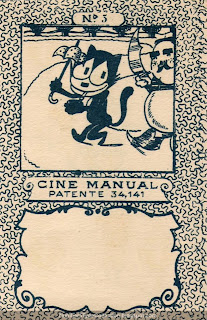 Each card back includes a number, Felix the Cat-like cartoon picture, and "CINE MANUAL" title, which translates to "HAND MOVIE." Unlike the suited fronts, back numbers go from 1 to 48. If you stack them all in numerical order, the pictures animate like a flip book. It's a very interesting addition to an already colorful set--and apparently the company gained a patente on the concept.

Searching for info on Baraja Cine Manual uncovered a PowerPoint presentation that profiles several sets produced outside the USA. Each slide profiles a set by scan and description, though non-Spanish speakers might need Google Translate to read them. Find the slides at CROMOS DE BÉISBOL.

Value: I found about a half-dozen foreign listings asking from 25 to 70 Euros for the set. Singles and mixed lots are probably out there, though not easy to locate.

Fakes / Reprints: No idea if anyone's faked this set, though it'd be pretty easy with modern tools.

It appears to me that they are golfers and there is some violence on the fairway, no matter what words are scribbled on the card.