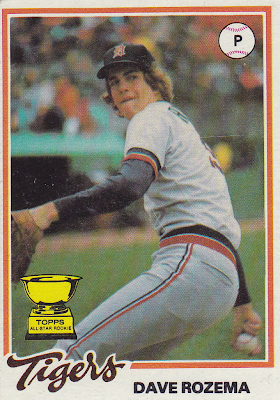 This card's also important for folks who collect the Topps All-Star Rookie trophies (the Wikipedia profile lists them all). With one player per position, Eddie Murray (DH) and Andre Dawson (OF) were Rozema's best-known teammates (1977 ASR selections). 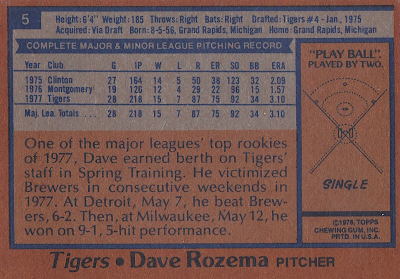 Dave tossed an excellent 15-7 rookie campaign, a win total it took another 3 years to match. Despite obvious pitching skills, a penchant for bizarre injury (karate kick bobblehead here) limited him to 10 seasons and a 60-53 record.

Value: Complete sets go for $10-20, depending on condition. Jack Morris, Mark Fidrych, Lou Whitaker, and Alan Trammell are the stars.

Fakes / Reprints: Burger King cards circulated in the Detroit area and show up on eBay, so Tiger fans can probably get them. I don't know of any reprints and they're probably not pricey enough to be worth doing.
Posted by Matthew Glidden