I think of Mel Stottlemyre as the heir apparent to HOFer and fellow Yankee Whitey Ford. Each spent their whole career in pinstripes, just in quite different eras. Whitey oversaw New York's 1950s ascendence, captured six World Series titles, and passed his "staff ace" baton to young Mel in 1965. (Despite their Yankees swooning to a sixth-place finish that year, Stottlemyre went 20-9 and Ford 16-13.) 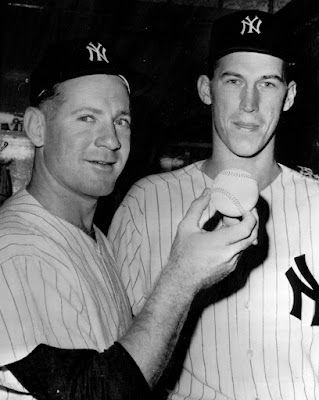 Today's 1966 and 1967 Bazooka sets straddle Ford's handoff. Whitey retired after 1966, just in time for Mel's Yankees to spend their next decade in the AL doldrums, never reaching the playoffs.

Boxes of Bazooka gum offered all manner of enticements in the 1960s, sport and non-sport, including this water-and-spoon science experiment and a chance to buy their 60-cent chemistry set.

During baseball season, Bazooka sold boxes of gum with a 3-player panel on the back. The company got a little lazy with their 1966 checklist and 1967 checklist, publishing many players with identical pictures and numbers, including Mr. Stottlemyre at #5. That makes it impossible to tell which year Mel's from, unless you own a full box.
Flip a 1966 Bazooka box to see Sandy Koufax next to their "3 baseball cards" promo.

While it's fun to look at classic Bazooka designs, it's even better to remember how skilled I was at cutting things off those boxes. 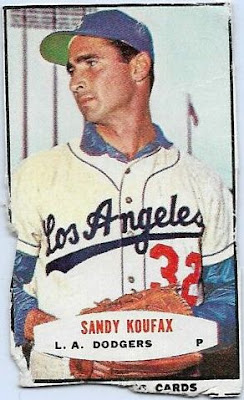 Perfect.
Value: You can buy Bazooka cards several different ways, with rapidly escalating prices. This clean-cut #5 cost about $10, on the high end of single commons. Full, uncut panels can cost several times that and complete boxes run $100 or more.

Fakes / Reprints: Unfortunately, someone faked the whole 1963 Bazooka set in the last several years, so it's entirely possible others got the same treatment. (I don't know of any legitimate reprints by Topps or their reincarnated Bazooka brand.)
Posted by Matthew Glidden