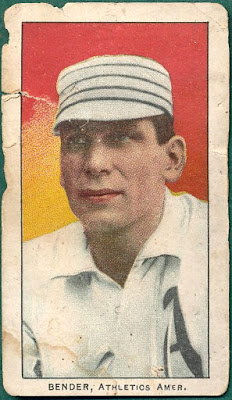 Bender, stereotyped as "Chief" for his Ojibwa heritage, pitched in Philadelphia for legendary manager Connie Mack from 1903 to 1914, winning 193 games in 12 seasons. (Full stats at Baseball-Reference.com.) After retirement, Albert worked in a handful of coaching and scouting roles, with most of them served, once again, under Mack.
Bender's career with the Athletics organization reminds me a lot of Johnny Pesky's lifetime with the Red Sox, as both men built strong reputations for personality and baseball smarts. (Ty Cobb, not one to slather praise, called Bender the most intelligent pitcher he ever faced.) 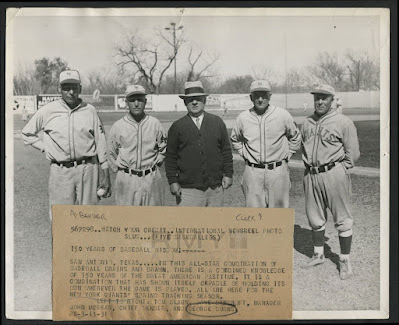 One year coaching for the New York Giants brought Bender into this photo with John McGraw, though they mislabeled him in the legend. (Note the handwritten correction.) 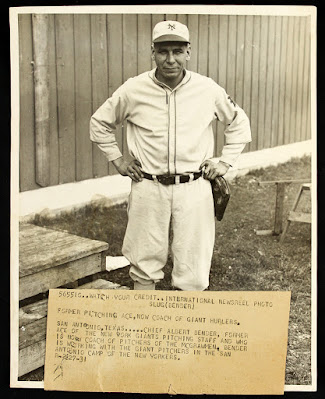 This solo photo also mislabeled Bender as a Giants ace, instead of an A's ace. Time to put a new guy on the baseball beat! 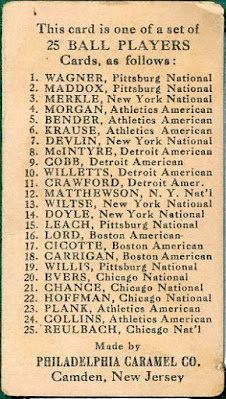 E95 is one of the first sets to number its cards, listing the players by last name and team on the reverse. Philadelphia Caramel followed up with a similar 25-card set in 1910, the E96s. (This blog profiled its #5 in Oct 2008.)
All six teams from this set were part of the AL or NL 1909 pennant race, pointing to a late-season release date. One guy stands out as unusual for inclusion, being a light-hitting, part-time player in 1909: Fred "Bonehead" Merkle, best-known at that point for his 1908 base running blunder. I guess all is fair in love and war baseball cards! 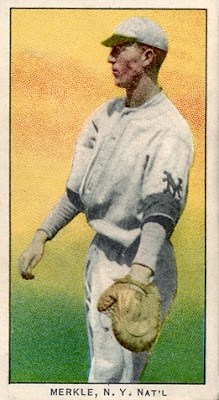 Value: E95s cost a lot of money, even in lower grades. As a HOFer, this poor-fair Bender ran about $60 in 2003. When the vintage market jumped a few years ago, this set followed suit. These days, most sellers ask at least $50 for commons and many times that for legends like Wagner and Cobb.

Fakes / Reprints: At least one modern company reprinted this set (and perhaps more). The site Caramel-Cards.com created an excellent guide to distinguishing them from original E95s.
Posted by Matthew Glidden

Awesome card! And thanks for posting the original/rps guide.

That must have been an nice pick up back in the day. Crazy how things fluctuate on ebay in just a few years.

It really is. I had a thought to build the set when commons were $20 and the big cards cost less than four figures. These days, ouch. No longer possible!