Today's guest just missed 2010 HOF election, falling 5 votes short of the required 75% (full MLB.com story). Some writers have made his long-time excellence for (mostly) middling teams a fulcrum to critique the business of baseball and Cooperstown's own political history. I just remember Bert as a worthy opponent for my Mariners, going 14-7 against them in 27 games pitched (career splits). 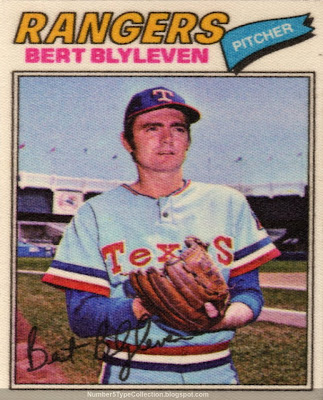 In 1977, Bert led the AL with a career-best 1.065 WHIP (BB + H / IP), yet went "only" 14-12. Being third starter behind Gaylord Perry and Doyle Alexander meant missing a start every now and then, but a few extra wins probably wouldn't have gained Cy Young notice. (Sparky Lyle, the Yanks' dominant closer, took the award by winning 13 and saving another 26.) 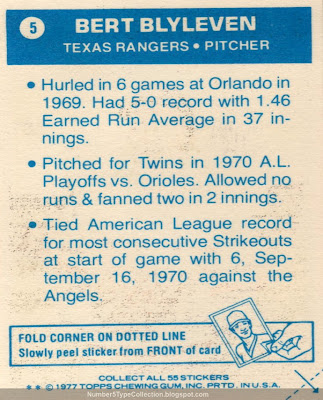 
Topps printed this 55-sticker, cloth-front set as a companion to their normal 660-count issue. It came in its own wax packs and proved relatively popular. The peel-away, self-adhesive back includes player highlights, though I think stats would've worked fine. (Perhaps that would've cost more than this one-off project was worth to them.)

1977's the best known cloth sticker set, but Topps tried them first in 1972. Robert Edwards Auctions sold a pair of uncut 1972 sheets for $1K not long ago.

Value: Ungraded sets go for up to $50 and singles cost a dollar or two. Nolan Ryan is the top star and could cost you $20.

Fakes / Reprints: Haven't seen any fakery for this set, as it's too costly to replicate a sticker issue for just a few dollars.