How far can an American travel to see some baseball? Back in 1979, a Boston resident could circumnavigate a fifth of the globe, 5087 miles total, and see the Hawaii Islanders play AAA ball at Honolulu's Aloha Stadium. If you do, be like Mr. Dyes and bring your beach towel. 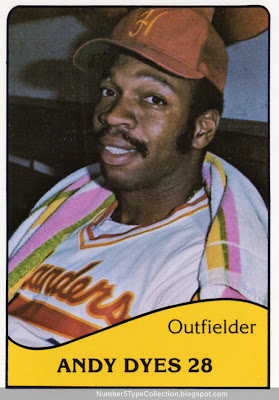 The Islanders baseball team is mentioned on a number of occasions in the 80's television series of "Magnum PI". The main character played by Tom Selleck was a baseball fan for the Islanders and often he wore a Detroit Tigers ball cap.

(The 1979 Islanders served as a San Diego affiliate, not the Tigers; that part's Magnum all the way.) 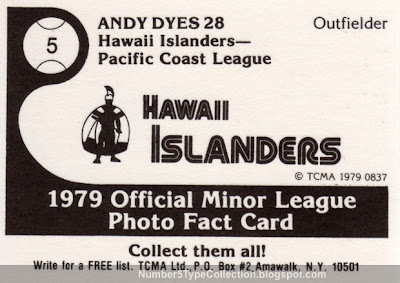 TCMA left Andy's 1978 stats off his card, possibly because he split time between 3 organizations--Seattle, Toronto, and the aforementioned San Diego. (Full stats at Baseball-Reference.com.) It proved his best professional season; Andy retired after two more years in Honolulu, something we can all aspire to doing.

Oh my goodness, what a great card.

I liked its inclusion of the team's insignia in prominent fashion (for lack of stats). He's a pretty dramatic-looking dude in the cape and hat.