Between 1976 and 1981, the Yankees won 100+ games 3 times, the AL East 4 times, and the World Series twice. Most accuse them of buying players and titles, yet their AAA farm team also excelled, providing a steady stream of surrounding talent for their free agent acquisitions. 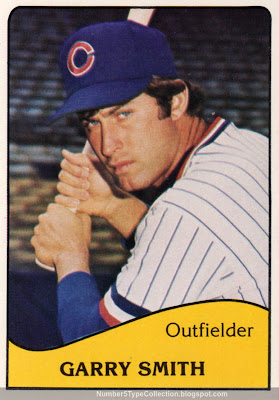 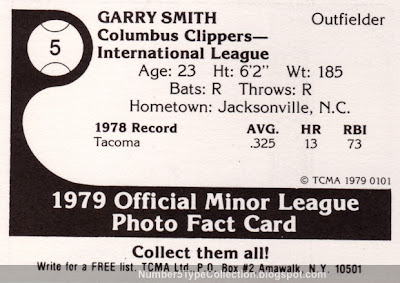 In 1978, Yankee farmhand Garry had his finest season. He played everyday (116 games), registered a .419 OBP, and set career highs in hits and RBI. (Full minor league stats.) For all the winning and periodic good play from Smith, the parent club never rewarded him with a call to the majors. It's likely a crowded New York outfield made it almost impossible to break through; Lou Piniella, Mickey Rivers, and Reggie Jackson manned those spots in 1979, with vets Oscar Gamble, Bobby Murcer, and Roy White backing them up.

Fakes / Reprints: People have probably reprinted valuable minor league league cards of big MLB stars, but I don't know of any for commons.

Garry fractured his ankle during the 1979 season playing golf.