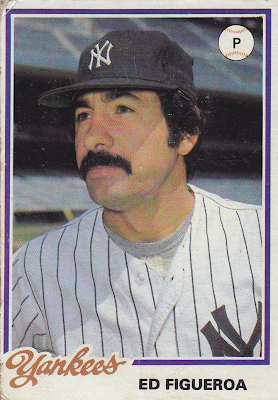 Most of the set reuses the "normal" Topps player picture. Fortunately, Goose Gossage got a new photo, as 1978's #70 is an awful airbrush job from his time as a Pirate. (Compare Topps' bad art to BK's portrait.)

Like other 1978 Burger King issues, only the checklist differs from the Topps design (PhillySportsCards.com has a nice gallery), so people often confuse the two sets. Card number (and pose variation, if any) distinguish them. 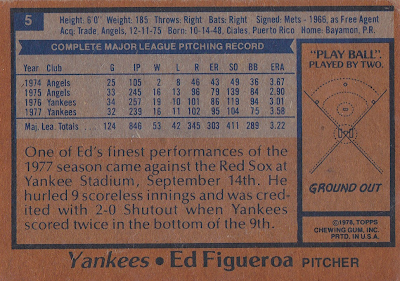 Ed Figueroa went 20-9 in 1978, becoming the first Puerto Rican pitcher to win 20 games. Arm injuries limited his effectiveness in 1979, "earning" a release by the Yankees. He finished with a year each in Texas and Oakland and retired in 1982.

Value: Complete sets go for $15-30, depending on condition. Besides the HOFers, semi-stars like Ron Guidry and Willie Randolph cost more. (PhillySportsCards.com ranges from $.15 to $4 for singles.)

Fakes / Reprints: Burger King cards are available on eBay (and elsewhere online), so Yankee fans can probably get them. They're not valuable enough to be worth reprinting or faking.
Posted by Matthew Glidden