TCMA published an almost limitless number of minor league team sets during the 1970s and 1980s. They ramped up slowly with a few midwestern teams in 1974, but grew to almost dominate the market by 1978.

According to the SCD, 1979 contained more than 50 TCMA team sets, covering teams from Florida to British Columbia and Massachusetts to California. (This is the blog's 5th profile of a TCMA minor league set and first from that prolific year.) 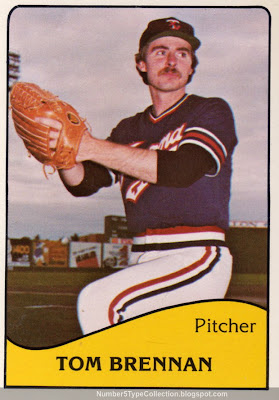 Future big-leaguer Brennan had no problem holding the pose you see, left leg cocked and held at the ready. In fact, he usually pitched with a significant pause at the leg-lift stage, similar to Hideo Nomo's full-stretch windup. (Check it out in Nomo vs. Ichiro, circa 1996.) Tom eventually released the ball sidearm, a complete delivery that no doubt puzzled opposing batters. 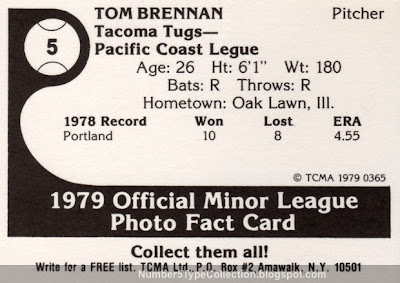 Tom spent a long time in baseball, with 12 seasons of minor league work sandwiched around a full year with the Indians in 1982 (full stats at Baseball-Reference.com). He played for 10 different Cleveland farm teams from 1974 to 1983, including two quality years with the Tacoma Tugs in 1979 and 1980, where he went 21-10 with 4 shut-outs.