It's hard to quantify everything Campy did for the Dodgers, but his shadow looms much longer than "just" 10 years of catching in Brooklyn. I'm a big fan of his cards, which cover a great range of batting, fielding, and posed positions (scans from CheckOutMyCards). 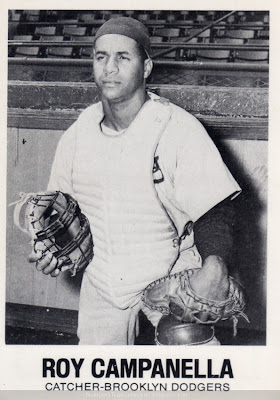 Card front
TCMA picked an interesting shot of Campy in full gear for this baseball history set. As with their 2-series issue that covered the 1960s (#5 profile here), this Renata Galasso co-produced set added a new crop of players every few years from 1977 to 1984, eventually totaling 270 cards. (Some players appeared multiple times.) 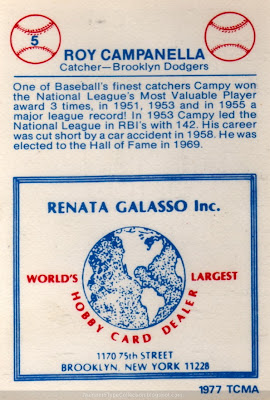 Card back
Even though a car accident restricted Roy to a wheelchair at age 36, he remained with the Dodgers, cheerfully coaching catchers for many years. The team recently created an award in his name and gives it annually to the player who best exemplifies his spirit and leadership. Jamey Carroll received their 2010 award on Sept 23.

Value: TCMA and Galasso printed quite a few of these sets, so they're both easy to find and relatively cheap. This Campy runs a few dollars at most.

Fakes / reprints: I've never seen any reprints in the marketplace.

I will always love that set. It was an early way for me to obtain cards of guys like Campy, Robinson, Snider and the rest. We beat them up pretty bad and I remember whiting out the copyright date, perhaps trying to fool myself into thinking they were older cards???

One of my favorites is the Carl Furillo.

Nice choice. I'd forgotten about Furillo's "running catch" card, but just updated this post with a scan.