Ah, the dilemma of "new" amid a sea of "familiar." Expansion teams, which baseball added four of in 1969, scramble to connect new fans and players as quickly as possible, since neither side knows each other. As the first non-American major league team, Les Expos faced extra competitive and financial hurdles, as they overlapped NHL's hockey season and worked within a different economic system.

Montreal did own a significant minor league past--Brooklyn even seasoned Jackie Robinson there prior to breaking the color barrier--but now needed to familiarize a roster of youngsters and expansion draftees. Without some shared recognition, players feel out-of-place and teams fail to make money. (Lousy management led Seattle's Pilots to move after only one year, becoming the Brewers prior to 1970.) 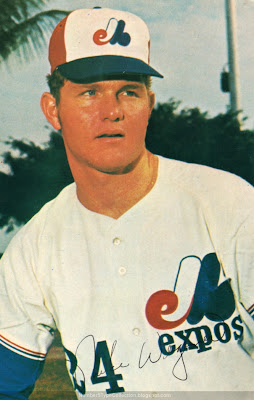 Card front
This postcard clearly came from 1969 spring training, given the palm trees. Montreal selected Mr. Wegener from Philadelphia during its expansion draft, finally giving him a chance to start after 4 years as a farmhand. Mike batted well for a pitcher, going for .241 with 7 RBIs that year, and hit a high point on June 14 by shutting out the Giants in Candlestick Park. 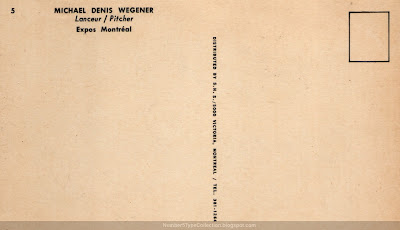 Card back
Best I can tell, Montreal produced a 16-player postcard set in both 1969 and 1970, for a total of 32 numbered cards. Its combined checklist includes team All-Star Rusty Staub, veteran reliever Roy Face (previously profiled on a #5 TCMA Pirates card), and best-name-nominee Coco Laboy. (See the full roster at Beckett.com.)

Value: This cost $3 on eBay, about right for lesser-known players. As a Montreal favorite, Staub would probably run $10 or more.

Fakes / reprints: This is a rare set, but I doubt anyone tried reprinting them.
Posted by Matthew Glidden