For a team with rare on-field success (a handful of winning seasons and 1 pennant in half a century), the old St. Louis Browns fielded plenty of HOF-caliber players. "Gorgeous George" Sisler proved one of their best, batting over .400 twice, winning the AL's first MVP award in 1922, and setting a single-season hits record that stood for 80 years. (Full stats at Baseball-Reference.) 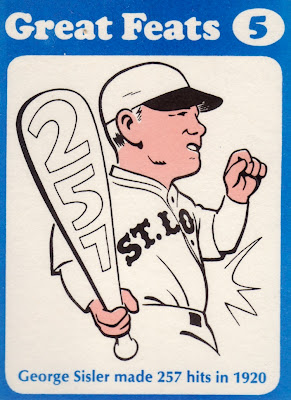 Artist Bob Laughlin turned this clean, nostalgic art style into two lines of business during the 1970s. At the candy counter, Fleer published his World Series cards (1971 #5 profile here) for several years, possibly until 1980. They also planned to collaborate on these "Great Feats" cards until Topps printed their own 1971 "Greatest Moments" set. Fleer ultimately backed out of the plan, so Laughlin sold it by mail order and continued to self-publish oddball sets throughout the decade. ("Long Ago Black Stars" is my favorite.) 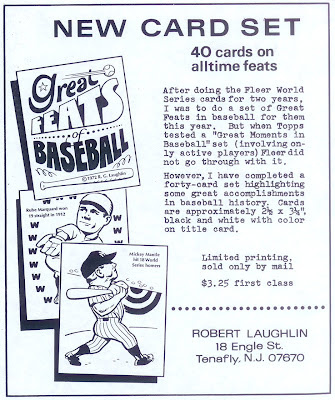 
For more info on Laughlin's sets and overall excellent card research, read "How Topps Foiled Fleer's Plans" at the superlative Fleer Sticker Project. (It also provided the ad scan above.)

Value: Most of the set features well-known players, so singles can run up to $10. 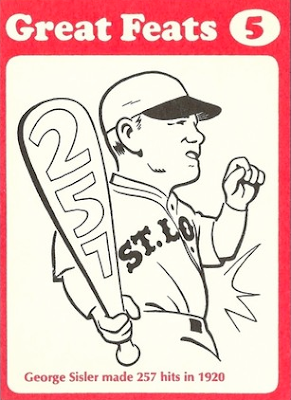 Fakes / reprints: While not technically a reprint, Laughlin produced versions with both red and blue borders. A year further removed from the Topps set, Fleer decided in 1973 to go ahead with a "Famous Feats" set that reuses some pictures from this set.
Posted by Matthew Glidden