This set covers all baseball title match-ups from 1903 to 1980. Originally released in 1971, Fleer continued to sell it off and on through the decade, updating with new champions as the years passed. 1907 saw the first of back-to-back titles for Chicago, but the Cubs remain winless in the World Series since. (At Wrigley last year, one of the bittersweet fan-made t-shirts said, "any team can have a bad century.") 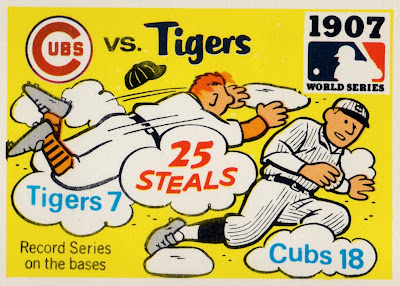 Card front
Is this the only card to feature two different players sliding? It might very well be. 25 steals is already impressive, but consider they came in a 5-game series. These days, teams are lucky to take 10 extra bases combined. 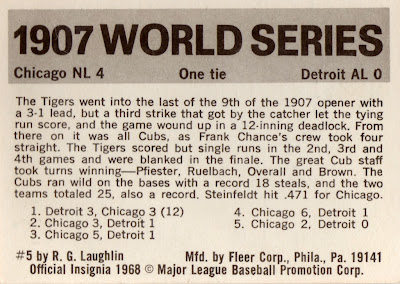 There's a ton of great World Series set info out there, but these 2 articles also talk about Laughlin's influence on collecting, publishing, and cards in general.


Value: They run a couple dollars each, perhaps more for cards picturing legends like Babe Ruth.

Fakes / reprints: This is a fairly popular re-issue set, but I haven't seen any reprints in the market.
Posted by Matthew Glidden