Not many sets show pitchers as batters, but 12-year pro Tom Brennan got the privilege on his very first card. Speaking of other rarely seen features, are those...muttonchops? Those 1970s never stop being the 1970s. 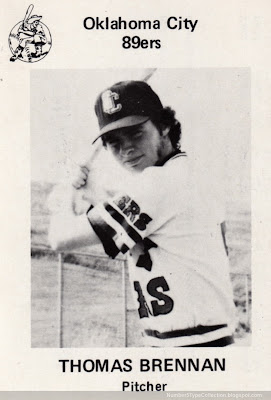 Card front
If you believe Baseball-Reference.com--and who doesn't--Brennan batted like most pitchers do. In 12 major league plate appearances and 20 more in the minors, he managed 2 singles and a double. (That's still 3 more professional hits than me!) 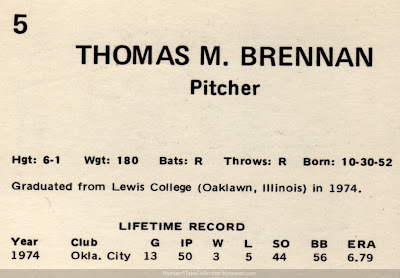 Card back
This 24-card debut set from Oklahoma City's erstwhile 89ers (now the RedHawks) features black-and-white players and a scrubby Midwestern background. Plenty of Tom's 1975 teammates forged long careers in the majors, including Duane "1 homer in 3,379 at bats" Kuiper and Larry "Traded for Jeff Bagwell" Andersen. 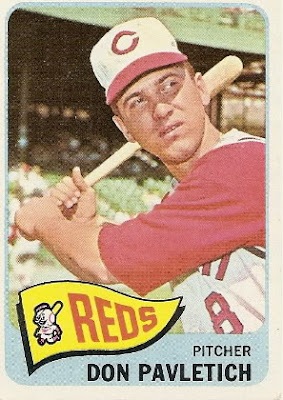 Fakes / reprints: My desktop inkjet could reprint these cards accurately, but I'd have a hard selling them to anyone.
Posted by Matthew Glidden