This 66-card set profiled all the World Series match-ups from 1903 to 1969. If the math doesn't add up, it's because 1904 had no series and this set gave it no card. NY Giants manager John McGraw refused to face the Boston Americans that year, in part because he didn't get along with AL President Ban Johnson. (It might also be because Boston defeated Pittsburgh in 1903, so were no pushovers.) 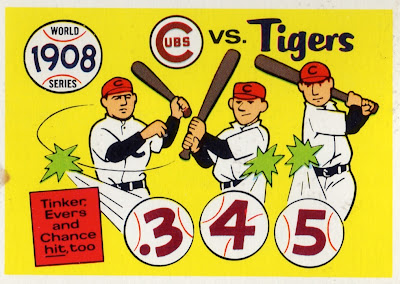 Fleer republished this World Series set from an original design by artist Bob Laughlin (1968 version #5 profile). His 1908 picture merges famed fielders Joe Tinker, Johnny Evers, and Frank Chance into one number, a .345 batting average. Here's how the trio did individually in 1908's series.

Player-manager Frank Chance's gap power, great speed (403 career steals), and good batting eye (~70 walks/year) made him Chicago's key player for most of their "championship decade" (titles in 1905, 1907, and 1908). Checking his career stats made me wonder--has another first baseman led their league in stolen bases twice? 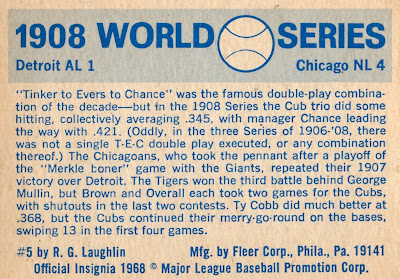 Fans of double play combos like Tinker-Evers-Chance should read "A Record with Legs" by Bob Warrington, a nice profile of the 1949 Athletics, who own the season record with an amazing 217 twin-killings. A's first baseman Ferris Fain holds the top individual mark by being involved in 194 of them.

Value: World Series singles cost a dollar or two, plus a few dollars for cards with Babe Ruth or other superstars.

Fakes / reprints: The 1971 re-issue is a real set, so not exactly a reprint. Haven't seen any fakes in the market.
Posted by Matthew Glidden