In July 1933, Major League baseball pitted the AL and NL against each other in an inaugural All-Star Game. Connie Mack and John McGraw faced off as managers, fans helped select the lineups,  and Comiskey Park roared when an aging-but-powerful Babe Ruth hit its 1st homer. Then as now, the game entertained fans and made money, without much regard for the final outcome.

Today, folks look back nostalgically at the Negro Leagues, but it was a business and owners took competition very seriously. Only two months after MLB's success, "East" and "West" teams trotted onto the very same Comiskey field for a game of all-black All-Stars. The Western team starter (and Chicago American Giants star) was Willie Foster. 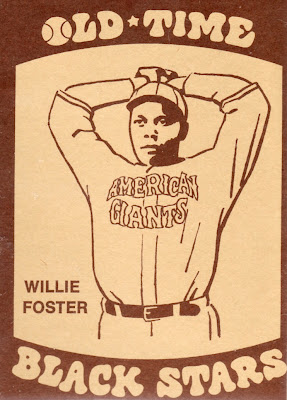 Card front
Foster threw a complete-game victory in 1933, beating a trio of East pitchers. The West team played their starters all 9 innings, a rare move for star-driven games of any sort. Both All-Star games became annual traditions, with MLB running theirs in July and the Negro Leagues playing in August or September.

The Negro Leagues struggled financially following WWII and surviving teams returned to barnstorming by the 1950s. Their annual All-Star game lasted until 1962 and teams occasionally played a second game outside Chicago. A semi-integrated MLB also ran two All-Star games from 1959 to 1962, perhaps in an effort to "drown out" interest in the all-black teams. (My conjecture, but plausible given baseball's cutthroat management style.) 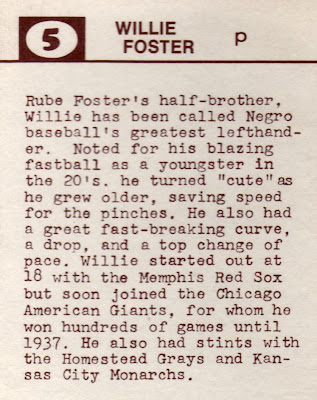 This set contains a bunch of HOFers, scans available at this Collectors Universe forum post.

Value: Foster cost me $8 in 2006. I estimate singles run at least $5 and definitely more for HOFers.
Fakes / reprints: Haven't seen any reprints in the market.
Posted by Matthew Glidden

Great post! Willie Foster was a great lefty who was overshadowed by his more famous and AMAZING brother...
I have seen these cards on the auction sites, but I am not sure if I like them enough to drop the coin. I don't think I could be happy with just 1 card. I would need to chase the set and that could get pricey...

Thanks, sir! Agree that putting it together takes at least money, if not time. I occasionally see the set at show oddball tables, but for $100+.