After a while, TCMA's red borders and blocky team names all blend together. The company produced 52 different (!) team sets that year, so this blog will have a virtual deck of cards once they all get an entry. 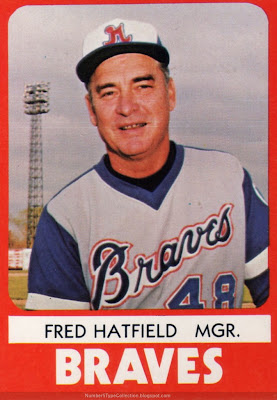 Card front
As you might guess from the uniform, Richmond served as a AAA affiliate for Atlanta in 1980, which they did nonstop from 1966 to 2008. Prior to the 2009 season, they relocated to Gwinnett, Georgia, chasing a more lucrative stadium deal. Fortunately for local fans, the Giants filled this gap by moving one of their AA teams to Richmond. CATCH SQUIRREL FEVER! 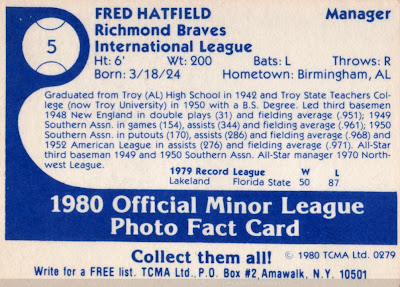 Card back
Note that TCMA invites you to write for a free list of cards and "collect them all." Putting together 50+ sets would've been a huge task in 1980--and remains one today--unless you had enough money to buy them en masse from the maker. It's a good bet at least one oddball dealer owned all the sets at one point, but I wonder if a collector ever did?
Value: Coach Hatfield cost me $2 from Beckett Marketplace, about right for "common" minor league players.
Fakes / reprints: Haven't seen any TCMA minor league reprints in the market.
Posted by Matthew Glidden