This is one of my favorite #5s ever. Even as Topps broke out with its larger, "modern" 1952s, Bowman polished their mini-painting concept to a shining diamond of excellence. 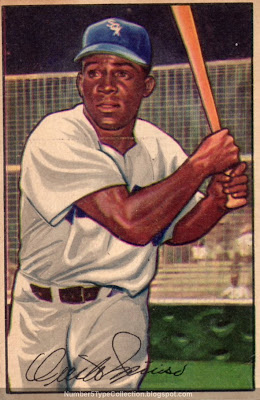 Card front
I've got 5 reasons to love this vintage jewel, one for each of Minnie Minoso's proper names. (Saturnino Orestes Armas Miñoso Arrieta.) 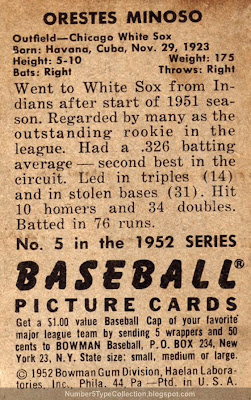 Card back
I kinda miss "text" card backs, but acknowledge the shift to baseball stats also encouraged young collectors to learn about numbers and math. Score one for education!

Fakes / reprints: People have reprinted the entire 1952 set, so be aware of "too-white" stock or cards with too much gloss.
Posted by Matthew Glidden