Recent #5 blog follower FanOfReds is also the man in charge of Nachos Grande, a card blog of his trades and opinions. Visitors should expect lots of scans, lots of trades, and a long legacy of posts covering every facet of baseball.

FanOfReds and I both lamented this week's news that Ken Griffey decided to hang up his spikes. As a Mariners fan since 1979, it's hard to accurately describe the tectonic shift Seattle experienced in 1995, transforming from a nation of skeptics into a baseball town via one playoff race. (No doubt any Reds fan can appreciate the Lou Piniella link between Cincy's "Nasty Boys" champs in 1990 and Seattle's own run.)

Griffey provided 1995's "swing point" with a game-winning homer on August 24th, beating John Wetteland and the Yankees. Improbably, it was his first career walk-off hit, let alone it proving a harbinging homer of things to come. 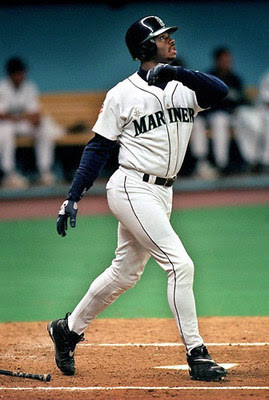 Top 10 Griffey moments at TheBleacherReport.com
FanOfReds covers The Kid in detail, both as a player and baseball card icon. Find more below!