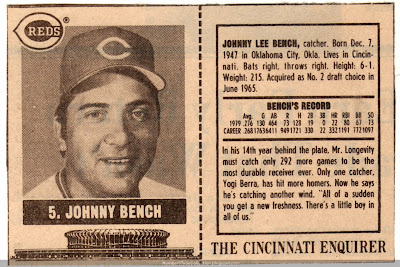 Card front (and back, sort of)
The Cincinnati Enquirer, which now runs Cincinnati.com, printed these profiles of the Reds as newspaper clip-outs from March to May in 1980. Numbered by player uniform and relatively small in size, it looks like you folded along the dotted line to make a "card." 32 players in all, this set includes Big Red Machine stars like Bench, George Foster, Dave Concepcion, and Tom Seaver. 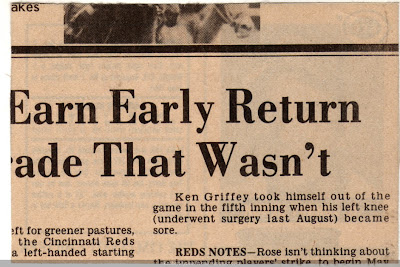 Card back
Even this small clip of newspaper references some important things.


Speaking of their 1980 transactions, check out these 2 draft choices from that year.

Tartabull did well for several other teams and finding Eric Davis in the 8th round is not bad at all.


Value: This is a very scarce set, at least outside of Cincinnati. While Bench is listed at $9 in the SCD annual guide, actual selling prices are uncertain. I've only seen near-sets on eBay, so assume collectors tried to get the whole team.


Reprints / fakes: It'd be fairly easy to fake this, assuming you had blank newsprint, but demand is too low to make it worthwhile.
Posted by Matthew Glidden

How did you come about obtaining this card? I have never seen them offered at card shows or the like. I know that it is a regional oddball, but I'm curious.

Picked up one of the 2 near-sets I've seen on eBay! Best I can tell, it came from a former Ohioan who kept them out of specific nostalgia for the 1980 Reds.