There's not much known about these oddball cards, at least in major price guides. Daily newspaper The Boston Globe apparently printed them to honor past Red Sox, but probably also as a way to "convert" their 50s and 60s photo archives into a salable product. 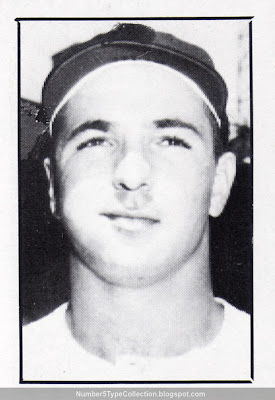 Card front
This photo's a claustrophobic close-up of Lou Berberet, part-time catcher for several AL teams, including a 1958 half-season in Boston. Always good with the glove, his batting unfortunately dropped off a cliff after age 27, and Lou stayed near the Mendoza line for the remainder of his career.

Note how classic Bowman designs reappear on the front (1953 profile) and back (1955 profile), though with lower-quality execution and almost no embellishment. Various sources place the release year anywhere from 1978 to 1981 and mention "Series I" (50s) and "Series 2" (60s) designations. This could mean they started distribution at the earlier end and continued to print cards into the 80s. 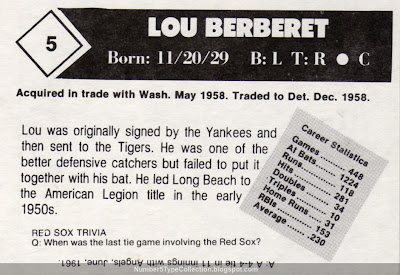 Card back
The card back includes a trivia question that asks about Boston's last tie game. Though ties don't really happen anymore, baseball rules do allow for them in specific situations.


"In Major League Baseball, games end with tie scores only in rare cases when conditions make it impossible to continue play. A tie game does not count as an official game in the standings unless it is finished later or replayed; however, individual player statistics from tie games are counted...Previously, curfews and the absence of adequate lighting caused more ties and shortened games."

Boston's last tie came on June 8, 1961, during the second game of a doubleheader. The "nightcap" didn't start until 9:06pm, so stood well after the witching hour when Angels took a 4-3 lead in the 11th. Gary Geiger tripled home Chuck Schilling to make it 4-4 in the bottom half, but got caught in a rundown and the Sox failed to score. Being close to the AL curfew, umps called the game, resulting in a tie. (In 1961, the AL used a 1AM guideline and playing a 12th inning would've taken them well past it.)

Here's more, in case you didn't know about baseball curfews!


"Curfews were fairly common in the major leagues into the 1950's and 60's. The initial impetus was World War II, during which there were curfews to accommodate dim-outs (as in "dim" the lights) to save energy. Games all over the country had curfews putting a limit on how long a night game could last. By the 1970's night games could last as long as it took."

Value: I bought Lou off eBay for $3.50. Boston Globe cards don't show up very much, so it's hard to estimate their market value. (Most 1970s oddballs cost under $5.)

Fakes / reprints: Haven't seen enough of this set to know if any fakes exist, but there can't be much of a market for them.
Posted by Matthew Glidden