Baseball fans seem to really like the Mud Hens, and I bet it's not because their female mascot's named "Muddona." Perhaps longevity bred familiarity and affection, as the team name traces all the way back to 1896, when the American Coot, aka "mud hen," made its home in Ohio's ample marshland.

Given the uniform's strong American colors and "serif-T" hat, I expected Toledo to be a Texas affiliate, but they served the Twins in 1980. That relationship ended in 1986 and they've been a AAA team for Detroit ever since. 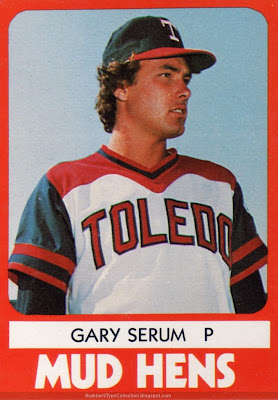 Card front
As a baseball-mad 7 year-old in 1979, I fell asleep with the Seattle team set clutched to my breast on more than one occasion and pored over every stat line as if gold nuggets would pop out of the newsprint. Just about every player who took a turn at bat or pounded a resin bag that year found a welcome chair in my baseball world.

I've got an unexpectedly strong memory for Mr. Serum, considering his brief 3 years in the majors. Gary pitched against the Mariners twice in 1979, both Minnesota defeats; a 10-2 loss on July 3rd likely imprinted his name in my cranium, considering how rarely Seattle scored into the double digits. (Credit the Baseball-Reference.com pitching logs for finding the exact date and score of that start.) 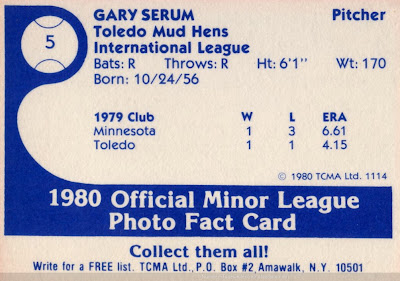 Card back
Serum spent most of 1978 in Minnesota's rotation, garnering 23 starts and 9 wins, but split 1979 between the Mud Hens and Twins. 1980 marked the beginning of his end, as Gary failed to make the major league roster and spent 3 more years in the minors before retiring at age 25.
Value: You can find TMCA minor league singles on eBay and Beckett Marketplace for a dollar or two.
Fakes / reprints: I've never seen a fake of a "common" minor leaguer and would be surprised if one turned up.
Posted by Matthew Glidden