Here's why you should read more, kids! Just this week, I learned much more about the multifaceted perfect storm that lead to Kellogg's long-running line of packaged cereal cards and today's bespectacled #5, Al Cowens.


Follow that progression and BAM! You end up with baseball players in boxes of 70s and 80s cereal. Kellogg's chose to wrap each card in a plastic sleeve within the Corn Flakes (or whatever) instead of printing them on the box. Unlike the 1960s Post sets, this meant young collectors couldn't see who they had until it was time to eat.

While I already knew something about the union's growth, my recent read of Dave Jamieson's new book Mint Condition filled in this story--and a great deal more--in satisfying detail. I highly recommend it as history of both card collecting and baseball in general. 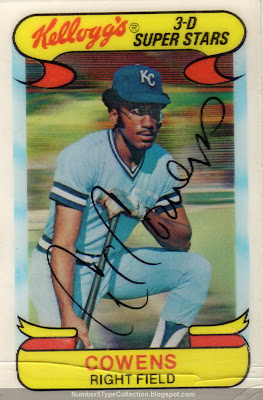 Card front
Kellogg's leapt into baseball with XOGRAPH's 3D cards, a thick-stock design that survived food packaging better than normal cardboard. They created the distinctive illusion of depth by texturing its plastic surface and "blurring" the background, pretty much what you see here. Holding and tilting the card makes Al "move" a little side-to-side, like a poor man's hologram.

I really like how this card echos KC's powder-blue uniform on its outside edges. They also gave Al a huge autograph, relative to the usual "bottom third only." 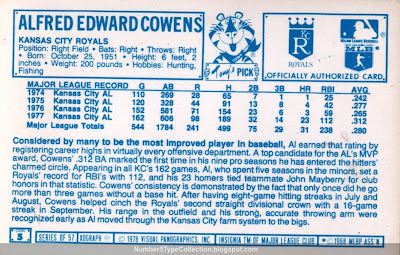 Card back
Card blog Dinged Corners recently asked people to nominate the best glasses on a baseball card. While Al Cowens doesn't have the awesome shades of a Bob Watson, he's clearly a serious batsman with a job to do.

Value: "Common" Kellogg's cards cost a dollar or two, depending on condition. A friend sent Mr. Cowens--with obvious surface cracks--to me for free a few years ago.

Fakes / reprints: It'd be tough to fake a Kellogg's card and I haven't heard of any in the marketplace.
Posted by Matthew Glidden

When I was a kid, not only did I have to wait until it was time to eat in order to see which player I was getting, I actually had to wait until the damned thing fell into my bowl. Mom wouldn't allow us to reach into the cereal to dig it out. My solution was bigger bowls (or two bowls), not really the healthy alternative.

Wow, that's a breakfast taskmaster. Do you remember how much of a set a kid could build in those days? At about 60 cards each and one per box, that's a lot of cereal...