Today's the first day of 2010's World Cup, a 32-country, month-long competition that whittles down to a single champion. It and the Olympics pretty much define high-profile international sports. Major league baseball's own "World Series" includes ever-growing numbers of foreign-born players, but comes from very different roots.

Born in a pre-immigration American era, baseball's championship took the name "World's Series" far before 1900. In this case, "world" refers specifically to the realm of baseball--it's not meant to be arrogant, as it might sound to modern ears. The earliest versions pitted winners from different geographic areas against each other. (In 1887, Detroit beat St. Louis 10 games to 5.) 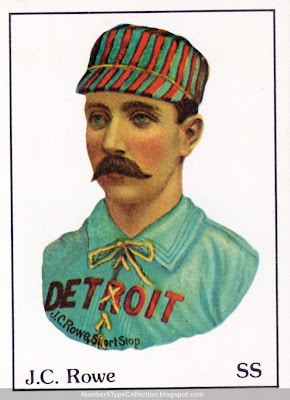 Much less controversial, this 18-card insert to SSPC's magazine reprints a distinctive (and expensive) 19th-century set made by Scrapps Tobacco, framed on a white background. Most good info on those rarities comes via auction houses. Here's one example (with scans) from Robert Edward Auctions (with whom I have no affiliation). 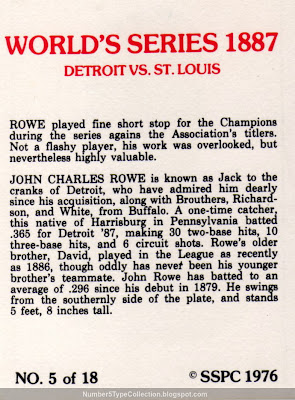 Card back
Card backs add a bio for each player and I like how the editor adopted some older phrasing for Mr. Rowe. (Being a lefty, I also hit "from the southerly side of the plate.")

Fakes / reprints: Since it's already a reprint of the Scrapps die-cut set, I doubt anyone would take the trouble.
Posted by Matthew Glidden