Not long ago, this blog profiled the nearly identical 1962 Sugardale Meats #5 of Perry. Most of that set matches up identically with 1963, aside from minor text updates. In Jim's case, they added "His record during the 1962 season was 12-12," which obviously couldn't come until after the season wrapped up. (I still love its side-printed advice: "This card may be wiped with a damp sponge.") 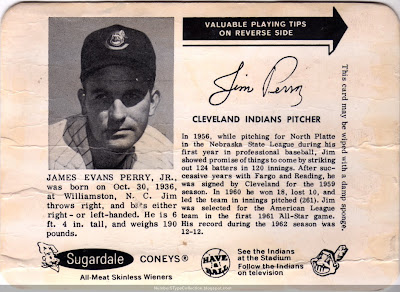 Card front
After two promising seasons at 23 and 24, Perry's performance sagged in 1961 and 1962. After 5 poor relief appearances in 1963, Cleveland swapped him to Minnesota for similarly shaky starter Jack Kralick.

Teams rarely make 1-for-1 position trades, but both pitchers benefited from a change of scenery. Kralick won 25 games for Cleveland over the next 2 years and made the 1964 All-Star team. Perry anchored Minnesota's rotation for 10 years and won the AL Cy Young in 1970. 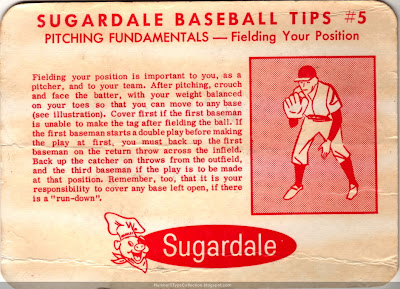 Card back
Cleveland traded Perry to Minnesota in early May, so Sugardale withdrew him from the packaging process and released relatively few of them. They didn't replace Jim with anyone, so #5 became a scarce short-print.

Value: Only a couple of 1963 Sugardale #5s made it onto eBay over the past few years. Given their scarcity, I was happy to win this low-grade example for $60.

Fakes / reprints: This oversized card is nearly 3" x 5" and has a protective plastic coating, so would be tough to credibly reprint. While I haven't seen any in the market, it's possible someone would take advantage of its scarcity to make an attempt. If you're looking for a 1963 Sugardale type card, go with someone cheaper than Perry.
Posted by Matthew Glidden

I noticed that they didn't include the tip of having a really big glove.