On June 23, 2010, the New York Mets hosted (and beat) Detroit's "Tigres" on Venezuelan Heritage Night. Given our southern neighbor's longtime importance to the sport, how could this card not follow? 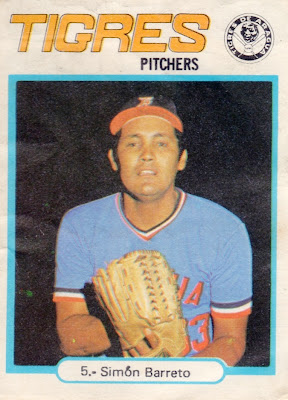 Simon Barreto played in the American minor leagues from 1971 to 1973, compiling 8 wins and 9 losses. Whether by choice or for lack of options, his career then moved south to baseball-friendly Venezuela. Unfortunately, foreign stats are hazy from that era, so I don't know how he did prior to this photo with the Tigres de Aragua. He looks brightly arrayed, if nothing else. 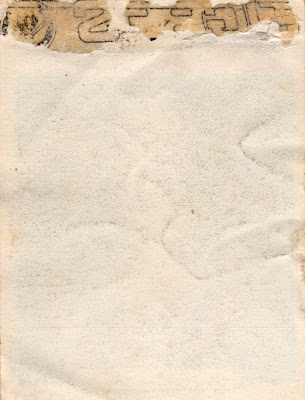 I normally don't show blank backs, but this one includes an album remnant. Its collector pasted Simon onto the page, but later thought better of it and pulled him away. This residue matches the card front, with both Tigres and their team logo.

This 402-sticker set features a great deal of local talent like Barreto, but also reprints portions of 1977 Topps itself. I'm sure player collectors gnash teeth at the inclusion of guys like Nolan Ryan and Reggie Jackson in its checklist, given their rarity and expense.


UPDATE: OldBaseball.com trading friend Rick shared these scans of a new-to-him album purchased with most of the set already mounted inside. Amazing pick up and the first intact album I've seen. 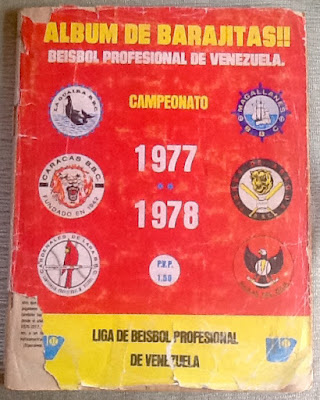 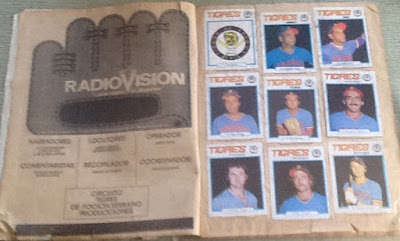 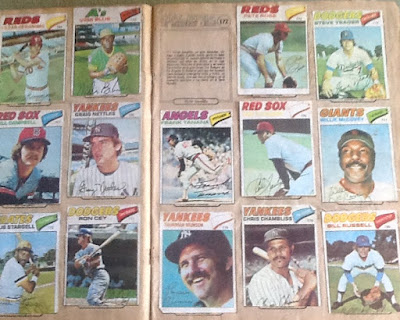 Value: "Common" players like Barreto cost $5 to $10 each, unless they miraculously escaped being taped into an album and remained in higher grade. MLB stars can cost hundreds, though so few are actually available that it's hard to set a consistent price.

Fakes / reprints: Haven't seen any definite fakes, but would be wary. It has thin paper and cheap printing, so would be easier to counterfeit than most Topps sets.
Posted by Matthew Glidden