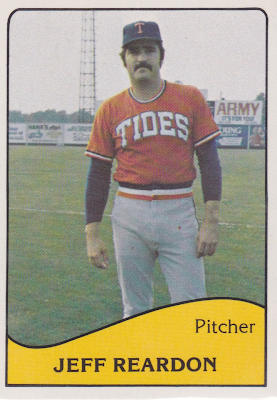 Jeff's bland, ill-fitting Tides uniform made me think of Dirk Hayhurst's Out of My League. Among many other vignettes, Dirk tells the tale of minor leaguers jockeying for uniform pieces prior to opening day. Non-MLB teams watch their bottom line closely and don't splurge on--just one example--fitted pants. The more you know! (And his book helps you know a lot.) 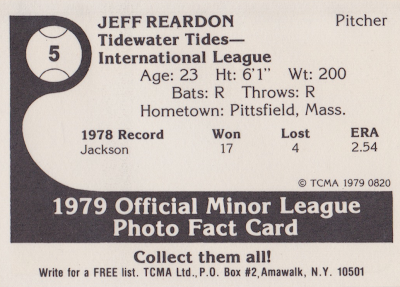 Jeff's hometown is close to (but not quite) the stated Pittsfield, MA. The nearby Dalton raised Reardon and dedicated him a ball park in 1990, pictured in the home state Red Sox cap he wore from 1990-92. 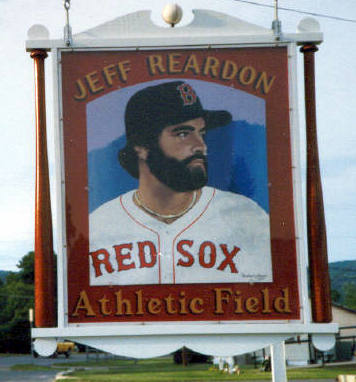 Cardboard Zoo compiled a bunch of info for this TCMA set in 2011 and pointed, in turn, back here. Don't get caught in a link-following vortex!

Value: Semi-stars like Reardon run more than typical TCMA singles and this #5 cost $6 at a dealer on Beckett Marketplace.

Fakes / reprints: Haven't seen any in the marketplace. (If Reardon made the HOF, the risk would be higher.)
Posted by Matthew Glidden

Jeff Reardon without a beard! Amazing!

Not something you'll see everyday, that's for sure. Just about every MLB card outside of his 1993 season with the Reds is full beard.