Ice cream! As a Wisconsin native, that "dessert" (for me, that means "any meal of the day") figures into both daily life and this blog's traffic, as one of my enduringly popular profiles is a six-card set of Fro-joy spokesman Babe Ruth from 1928, at the peak of his fame. It doesn't matter than #5 shows only his hands--see them in my #5 profile--any collector would be happy to own one.

Fro-joy wasn't the earliest company to sign a sports hero to endorsement deals, but they might've been first to get both home run and heavyweight champs, as they started with this six-pose Gene Tunney set in 1927. Cards show the champ wearing training gear (#1-3 & #5), suit (#4), and even a Tarzan-like glare (#6)--see the whole set at auction on HugginsAndScott.com.

"I must eat those things which are good for me--that's why I eat Fro-joy ice cream while training for my next fight."

Gene Tenney might've been paid to say those words, but he sure speaks my language. 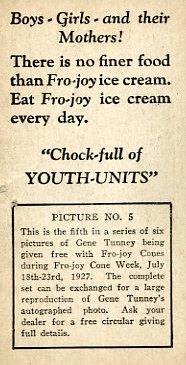 Fro-joy claimed to be "Chock-full of YOUTH-UNITS" for this era, but what did they imply YOUTH-UNITS were? Based on card text, ice cream offered several benefits.

So healthy! And, of course, it calls out to mothers as frequent purchasers and preparers of food for kids. No dad would enjoy ice cream! The notion is preposterous! (Burp.) 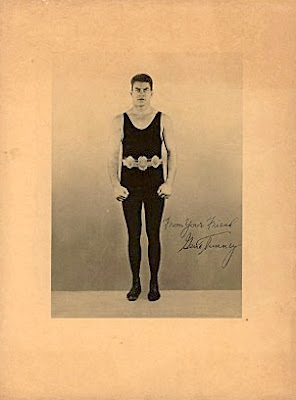 Cards backs advertised a swap of the complete set for this large photo and place their original issue as Fro-joy Cone Week, held in mid-July, 1927. I imagine the Babe Ruth set debuted in similar circumstances, with additional availability by mail.

Value (updated June 2018): I picked up #5 for $54 off eBay. Doubt that any individual cards costs more than another, with the possible exception of his ringside shot (#3).

Fakes / reprints: Someone of Tunney's stature would probably be reprinted early and often for boxing collectors. Take similar precautions buying his cards that you would with Ruth and be wary of modern fakes.
Posted by Matthew Glidden

I love the boxing card. If it wasn't part of your type set I would try to see what it would take to get it off of you.

In this case, it isn't! Found the cards from a search of #5s and decided to write up the profile.

There are two Tunneys waiting for an opening bid on eBay: Fro-joy Gene Tunney #3 and #5

Hope you win them!