If there's one boogeyman of low-budget set production like TCMA offered to a growing roster of minor league franchises, it's editing. Tracking stats, player movements, and getting baseball's bevy of unusual names just right take a back seat to finishing, printing, and delivering team sets to their clients on schedule. Thus did Danzel, a two-year pro in the Florida leagues, became Denzel, a jersey-and-hat-wearing Jack Black look-a-like. 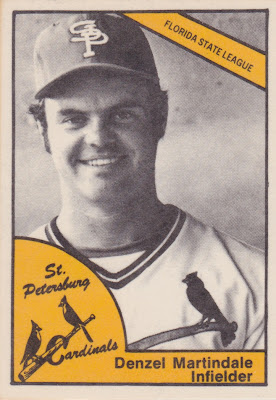 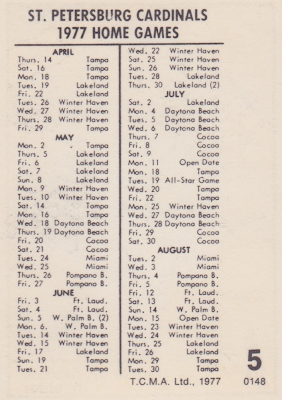 Thanks to the Internet, you can view card scans for everyone save Mr. Nagle. Its biggest names include future All-Star Tom Herr and sports agent Scott Boras, who played four years of minor league ball before moving on to legal work and sports representation. 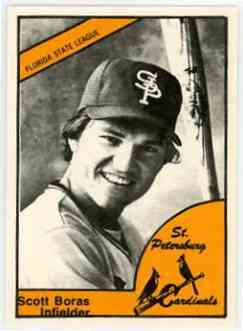 One wonders--did Boras pitch his services to former teammates? Given that many of his former clients came back to work for Boras after retirement, I'm thinking probably yes. He came across as sharp and self-possessed as a panel guest at this year's Sloan Sports Analytics Conference, qualities most people like in an agent or employer. This on-site interview says a lot about his current perspective.


Value: Mr. Martindale cost $2.50 at MinorLeagueSingles.com. "Full" sets might or might not include the unnumbered Nagle, so check with the seller if you want every card.

Fakes / reprints: These black-white-yellow cards would be easy to fake with modern equipment, but low demand means few people attempt it. Tom Herr's the riskiest for counterfeits, since his playing peak coincided with a card market boom in the mid-1980s.
Posted by Matthew Glidden