TCMA didn't snap today's shot on a baseball diamond, unusual for the "surprise, it's a camera" approach often taken in minor league photos. John Rabb's wearing a Cedar Rapids hat in front their Giants logo, so I'll guess it's a locker room intro, and perhaps an early-year press conference. 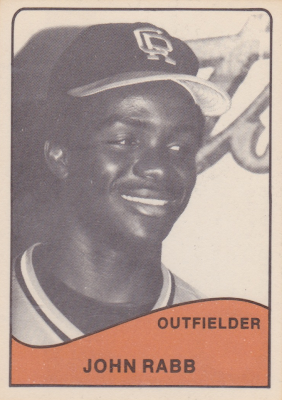 Single-A teams aren't expected to be All-Star factories, but Cedar Rapids hit the low end of expectations and produced just three future big leaguers in 1979: Rob Deer, John Rabb, and Jeff Stember. (This card calls Rabb an outfielder, but he actually spent more time behind the plate in Iowa and added a handful of games at 3B.) 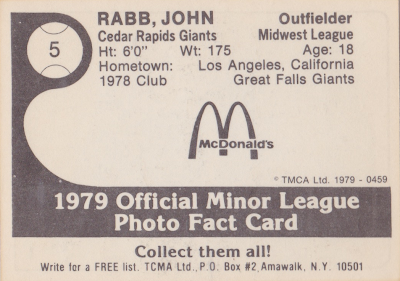 John's versatility continued in the big leagues, splitting time at C, 1B, and OF across stints with San Francisco, Atlanta, and Seattle. He might've pushed for everyday playing opportunities that didn't exist in SF, as the Giants ultimately dealt Rabb to the Braves for a veteran player with a similar skill set, Alex Trevino.

TCMA included an above-average 32 players in this set, including the aforementioned Rob Deer, whose home run power won over many a Milwaukee fan in the 1980s and 90s. (He's also the only man ever to hit .220 or less and slug more than 220 career homers.)

Value: John Rabb cost me $2 at MinorLeagueSingles.com. Rob Deer will run a little extra, at least in Wisconsin.

Fakes / reprints: Cardboard Zoo notes that TCMA reprinted several team sets as "collector kits" in the late 1980s, but I'm not sure about this 1979 set specifically. Founder Mike Aronstein's interview about their Cal Ripken card says a little more about how young stars (and hobby demand) led to minor league fakery.
Posted by Matthew Glidden