A 29 year-old veteran of 10 seasons at every professional level, Milt Ramirez spent just 1 year in San Jose due to their brief affiliation with Oakland. As mentioned in two other Missions #5 profiles (1978 here and 1980 here), Seattle "took over" the minor league club in 1978, so the A's moved their AAA team to Vancouver, with Milt in tow. 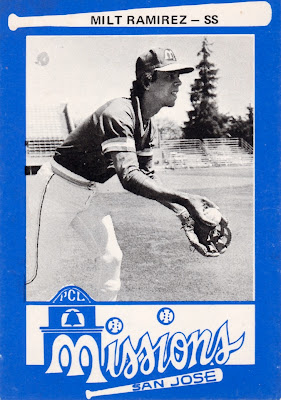 The card calls Milt a SS, but he actually split 100 games almost evenly with 3B and even played 8 games at 2B. Two different stints at the big-league level yielded a .184 average and 31 OPS+, so let's assume he knew how to turn a double play. 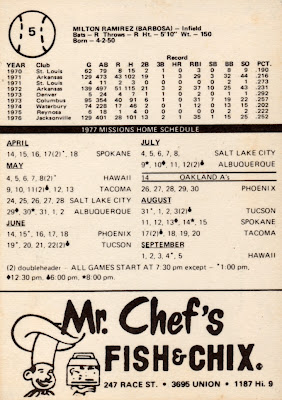 Baseball-Reference.com contains a vast quantity of info, from stats to oh-so-many-more-stats. Near the bottom of each player page sit Transactions, a log of known movements between teams. While fairly regulated now, plenty of mystery swaps happened in earlier years.

As the movie line goes, "there are 1000 stories in the naked city." It seems Milt Ramirez was involved with at least 4 of them. (Player page at B-R.com.)

The Missions set checklist includes several future MLBers. (Milt was both a past and future big-leaguer; after two years with St. Louis in 1970-71, he got a call back to the A's for 1979, his final season.)

Value: Milt came in a package from MrMopar! Check out my write-up on this gift.

Fakes / reprints: Doubt folks would try to fake non-star minor leaguers and haven't seen any in the market.
Posted by Matthew Glidden