You might look at a 1977 Tucson Toros card and see a disco mullet, meshback hat, and triple-stripe jersey. I look at this #5 and see the height of conservatism next to their upcoming guacamole fiesta, captured forever in the 1980 TCMA set. 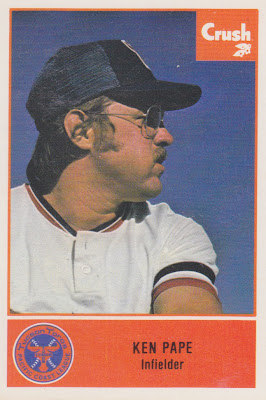 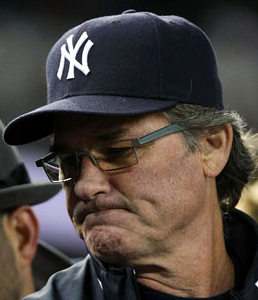 Kurt--I mean, Ken--spent 21 games on the Texas roster in 1976 and hit his only MLB homer in baseball's equivalent of "garbage time," late in a 13-3 drubbing at the hands of AL West rival Oakland. Pape also wore uniform #5 for his time with the Rangers, a nice bit of numerological synchronicity. Following that inspiration, the box score for Ken's single homer overlaps with several other #5 luminaries. 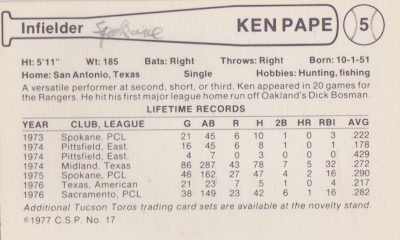 Prior to becoming Pacific Trading Cards and chewing through an MLB license during the junk wax era, Cramer Sports Productions competed with TCMA for 1970s minor league attention. 1977 marked their first year in full color, which they brightened further for Southwestern teams like the Albuquerque Dukes.

Value: Ken's #5 cost me $2 at MinorLeagueSingles.com. Teammate Len Barker later hit the apex of MLB success by throwing a perfect game (video highlights at MLB.com) and might run a little more.

Fakes / reprints: I doubt anyone on Tucson's roster found enough collector interest to be worth reprinting, other than immediately after Barker's perfecto.
Posted by Matthew Glidden