Spiritual cousin (and one-year predecessor) to the 1970 Topps Story booklets, today's set is actually a combination of two 1969 issues, stamp sheets and stamp albums. They include 10 players per team and come in standard card size, 2.5" x 3.5". Number 5 features the Atlanta Braves, home team of Hank Aaron...and some other guys. :-) 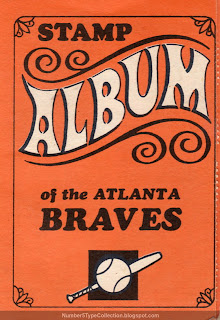 Topps issued the stamps in their own wax packs, with a 12-player sheet (folded down to 4-player size) and one team album for 5 cents. Some sheets unfold vertically, similar to the 1960 Bazooka Stamps, and others horizontally. Each one contains a mix of teams; 24 teams at 10 players each equals 240 stamps for the full set. 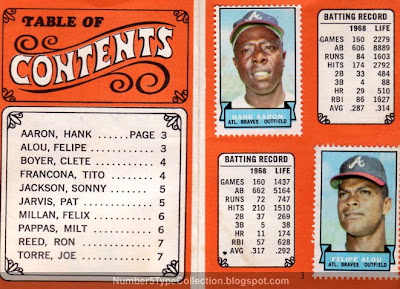 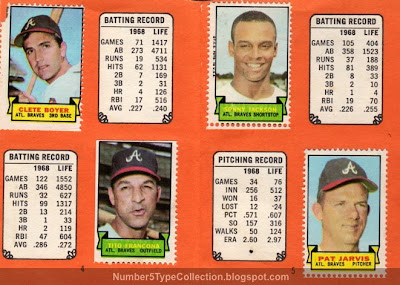 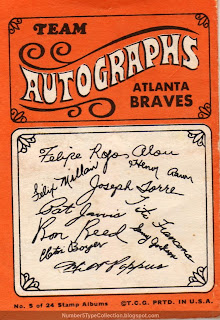 Bonus! Team autographs
Baseball added 4 new cities in 1969 and its accompanying expansion draft moved a lot of guys from team-to-team. MLB wanted to connect fans to their new players ASAP; Topps took the cue and created two such sets, these stamp albums and the (much larger) team posters.
Value: Full stamp sheets run $10 and up, depending on the players pictured. Albums cost a lot less, typically under $5. Set notables include Mickey Mantle (in his final year) and the Miracle Mets.
Fake / reprints: The albums would be easy to fake, but probably not worth doing. (You'd also need glue-back paper for the stamps.) I haven't seen reprints for either in the market.
Posted by Matthew Glidden

Good point! Easy to forget how good Tito was with the bat, too. Anyone who put up a career .272 average playing mostly in the moribund 1960s gets my respect.