This Goudey set's most identifiable by its 4-on-1 layout, featuring half-a-field of players on each card. Some put everyone from a single team together, but today's mixes Ohioans--two Cleveland and two Cincinnati. 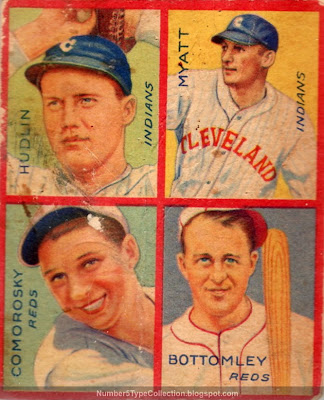 It's interesting to get 4 players at once, but there's nothing really "new" here. All four players have the same image on previous Goudey cards. 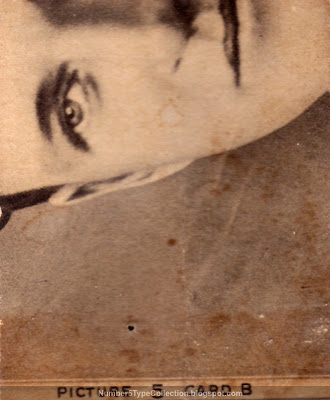 Check the back for this set's "innovation," a series of puzzle pieces that assemble into one of several complete images. Here's a quote from the excellent Obaks.com set profile.

"The puzzle pieces form nine different pictures: Detroit Tigers team, Chuck Klein, Frankie Frisch, Mickey Cochrane, Joe Cronin, Jimmy Foxx, Al Simmons, Cleveland Indians team, or Washington Senators team. The interesting thing about these puzzles is that there are more puzzle pieces (72) than cards in the set (36). As a result, all cards have several different backs. This may have been designed to entice the card buyers of 1935 to buy more, but the exact reason can only be speculated. In any case, most collectors piece together their 1935 Goudey sets based on the fronts, without paying attention to which puzzle piece appears on the back. For those chasing a "master" set, there are a total of 114 different front-and-back combinations."

Although Babe Ruth appears in the set--his only "playing days" card as a Boston Brave--they didn't create a puzzle portrait for him, possibly for lack of studio shot or to avoid paying a larger licensing fee.

Value: So many Hall-of-Famers appear in this set, it's hard to find a real "common." My #5-B cost about $10 because of the front staining. Anything with a superstar can command big money.

Fakes / reprints: Full-set reprints exist and individual stars have likely been faked. Check the card stock carefully and compare the print quality to others from the same era when buying.
Posted by Matthew Glidden